Tamil Nadu recorded the highest voting percentage in the history of elections held in the state according to the afternoon status. Right from the morning many people queued up in the polling stations and were so existed to cast their vote including some of our Kollywood stars. Many stars stood patiently in line to cast their vote. 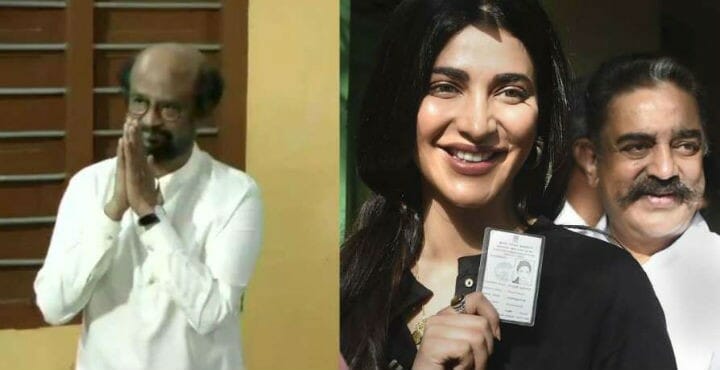 Superstar Rajinikanth was an early bird to cast his vote in Gopalapuram. The star, who was shooting for his film Darbar put the shoot on hold and returned to Chennai to cast his vote.

Actor and Makkal Neethi Maiyam chief Kamal Hassan who is debuting this year in electoral politics came along with his daughter Shruti Hassan to corporation school premises in Alwarpet to cast his vote.

Thala Ajith who has been a role model for his fans in everything came to vote as usual in the early morning. He was in the polling station in Thiruvanmiyur at 7 am to cast his vote.

Thalapathy Vijay cast his vote in Saligramam by waiting in a long queue. The actor appeared in a very simple outfit with his unshaved beard. The actor also took selfies with his fans while he was on queue and helped a little girl to get in the line, which created a happy mood in the area.

Vijay Sethupathi returned from Kerala to cast his vote. The actor, who was busy shooting for his film Marconi Mathai came to Chennai to cast his vote in Kodambakkam Public school. While standing in line the actor signed autographs and took pictures with his fans patiently.

Actor Sivakarthikeyan turned out to be a real hero today as the actor had to fight for his right to vote after he was told that his name was missing in the voter’s list. But the actor’s wife Arthi’s name was on the list. The Mr. Local hero then had to rise a complaint to the respective officials and things were sorted out then the actor cast his vote. Casting his vote the actor shared an important message to people, “Voting is your right and you have to fight for your right.”