Actress Hansika Motwani has landed on the landmark of completing 50 films in her career with her recent release Maha. On this occasion the actress has penned a touching note for her fans. Taking to her official twitter account the actress has shared the letter to her fans, with the caption, “Love and gratitude.” Here is the letter shared by the actress. 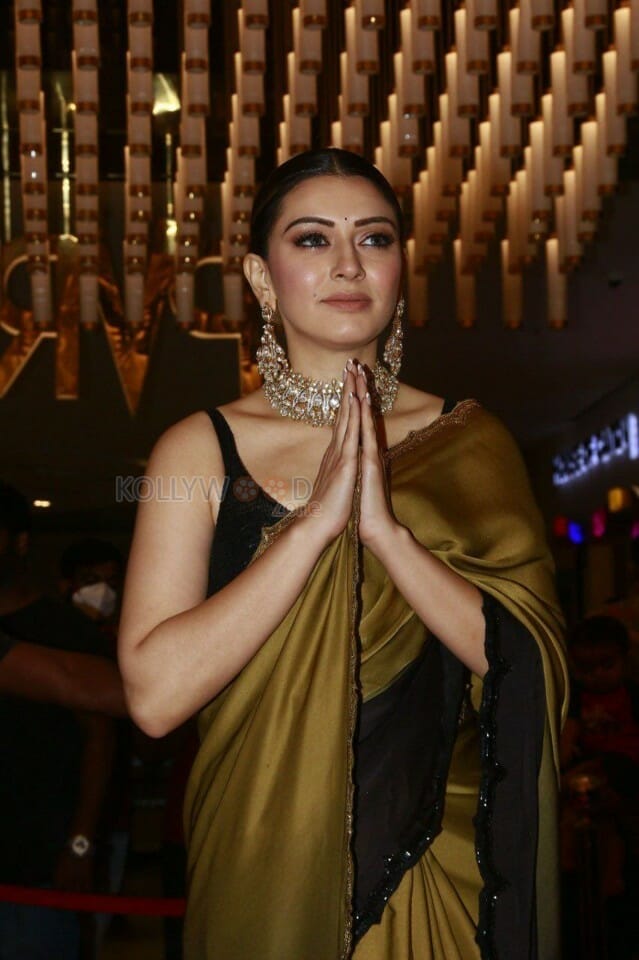 The actress begins her letter by calling her fans family, “Dear family, when I say family, it’s never complete without my dearest fans, who have been an immense support from the beginning till now in my career. With lots of happiness, I am expressing my token of gratitude for them on this special day that marks the release of my 50th movie – Maha.”

Writing further the actress said, “Few memories in our lives remain so fresh that we all can cherish them. Maha has endowed me with such a blissful experience, where every single moment and day of the journey has been phenomenal. Cinema means everything to me, and it’s been and will be an inevitable constituent in my life. Completing a 50-film mark isn’t easy for an actress, expect for the one blessed with unconditional love and support from the fans.” The actress took the opportunity to thank her fans, “I take this opportunity to thank my loveable fans and followers, who have nurtured my passion and desire to push the bars and encouraged my new attempts and experiments.”

Talking about her recent film, she states, “Maha is so special and close to my heart. Few things happen with divine intervention, and this movie is one such gift. Maha is the product of earnest hard work and team effort amidst heavy challenges. Today, we are placing it before you. The movie is all yours from today, and with the humble gesture, we as a team, place it before you. It has lots of entertainment, emotions, and intense content that will send you from theaters with 100% satisfaction.” She ended the note by thanking her co-star Simbu, “I thank my Dear Friend STR for being the absolute support, my co-stars, and technicians. I express my heartiest thanks to Malik sir for being the pillar of this movie. With Love and Gratitude. Hansika Motwani.”

Apart from actress Hansika Motwani, Maha has actor Silambarasan in an extended cameo role. The casting of the entertainer includes actors Srikanth, Karunakaran, Thambi Ramaiah, Sanam Shetty, Mahat Raghavendra, Priya Anand, Nancy Jennifer, Nanditha Jennifer, Sujith Shankar, and Vishnu Manchu in various other supporting parts. Cinematographer R Madhi has shouldered the camera for the flick. The musical instruments for the drama have been handled by musician M Ghibran. The editing division of the entertainer has been handed over to editor John. The project is funded by V Mathiyalagan under the banner house Etcetera Entertainment.

On the work front, actress Hansika Motwani who was last seen on screens in Maha is simultaneously shooting for multiple ventures. The Singam 3 actress is currently shooting for Rowdy Baby which is filmed by director J. M. Raja Saravanan, for a couple of her untitled ventures under the directorial of story tellers R. Kannan, Igore, and Vijay Chander, for her Telugu flick titled My Name Is Shruthi directed by filmmaker Srinivas Omkar, and for her Telugu web series Nasha. Apart from these projects, the actress has her Tamil flick christened Partner scripted by Manoj Damodharan in which she has shared the screen space with actor Aadhi Pinisetty, her Tamil web series MY3 helmed by director M Rajesh in which she has collaborated with actor Shanthanu, and her Telugu film 105 Minutes which is filmed by story teller Raju Dussa in the post production getting tuned for release.