First Look Poster OF Vani Bhojan and Madhampatty Rangaraj’s Casino Is Out!

Actor Madhampatty Rangaraj fell in the attention of the audience with his impressive performance in his debut film Mehandi Circus which hit the theaters under the direction of film maker Raju Saravanan with actress Shweta Tripathi in the female lead. Despite its slump in the box office, the entertainer gathered positive reviews from the critics and audience alike. The actor followed it by another decent performance in Penguin alongside actress Keerthy Suresh. The actor is now gearing up for the release of his third project named Casino. Director Mark Joel has directed the flick. Actress Vani Bhojan has played the female lead role. The venture which went on floors last year with a small pooja ceremony has been wrapped up and is in the post production shaping up for release. The dubbing work has been finished and the rest of the works are happening in full swing. 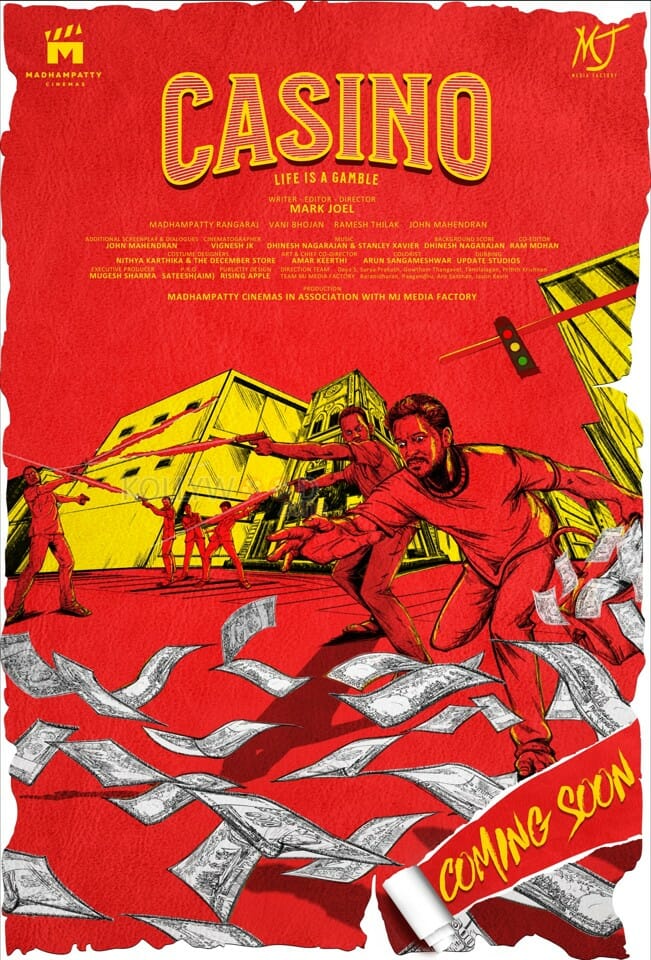 The animated first look poster has a staunch reddish background tone, with a bunch of money flying around while a group of men fire at each other in the background. Actor Madhampatty Rangaraj is said to have essayed the role of Sanjay, while actress Vani Bhojan has portrayed the part of Maya. It is said that the duo will not be seen as a conventional lead pair in the drama. There is news that the production unit is in plans to bring the entertainer to the screens by the end of this year.

Apart from actors Vani Bhojan and Madhampatty Rangaraj, the film has director John Mahendran of Sachein fame who is set to make his acting debut through the flick. Apart from them the drama has actors Ramesh Thilak, and Chella in key supporting roles. Musician Stanley Xavier will be handling the musical instruments for the film. Cinematographer Vignesh J. K has been roped in to take care of the cinematography department. The editing division of the movie has been handled by editor Deepak Bhojraj and director Mark Joel himself. The entertainer is bankrolled by Madhampatty Rangaraj for his home banner.

On the work front, actress Vani Bhojan who was last seen on screens in Raame Aandalum Raavane Aandalum is currently busy shooting for her next flick christened Rekla helmed by film maker U Anbarasan in which she will be sharing the screen space with actor Prabu Deva, for Oor Kuruvi scripted by director Arun Pandian in which she will be seen alongside actor Kavin, for her web series titled Kolaigara Kairegaigal filmed by storyteller S. R. Prabhakaran, and for two of her untitled ventures of actors Vidharth, and Naveen Chandra. Apart from these flicks, the actress is getting ready for a successive release in the likes of Pagaivanukku Arulvai helmed by filmmaker Anis in which she has costarred with actor Sasi Kumar, Thazh Thiravaa crafted by filmmaker Bharani Sekaran, and Paayum Oli Nee Yenakku scripted by director Karthik Chowdhary in the post production getting tuned for release.

Vishnu Vishal And Director Ram Kumar’s Ratsasan To Get A Sequel!