Home Kollywood News First look poster of director Vetrimaaran’s next is out!

Story teller Vetrimaaran who is known for his intense filmmaking had lastly delivered the gangster saga Vada Chennai with actors Ameer, Dhanush, Samuthirakani, Aishwarya Rajesh, and Andrea in various supporting roles. Currently the film maker is busy with the proceedings of his next action entertainer Asuran which also features actor Dhanush in the real role. Apart from directing the director also bankrolls projects under his home banner Grassroot Film Company. Now, the first look poster of the director’s next production venture is out on social media. 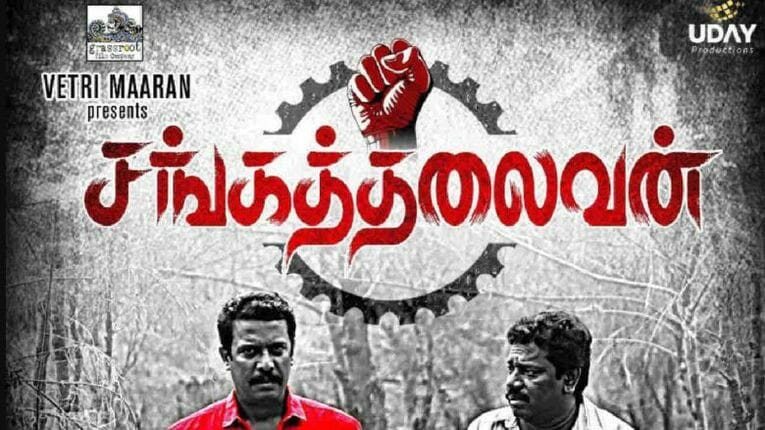 The project which is titled as Sanga Thalaivan went on floors in the year 2018. Actor and director Samuthirakani plays the lead role in the flick. The drama is scripted and directed by story teller Manimaran, former associate of Vetrimaaran, who has also directed movies like Udhayam NH4, Poriyaalan, and Pugazh. Now, the first look poster of his next social drama is out on the social media. Taking to his twitter account actor Samuthirakani himself has shared a couple of first look posters of the film under the caption, ‘we will win.’ The actor also took this moment to express his gratitude to the producer as well as to the director of the venture. In one of the poster the actor dons a red shirt and is pictured walking with a company. In the other poster he appears in front of a mic and orates furiously while there are posters of Karl Mark and Lenin at the background which suggests that the drama would be strongly rooted on communism. Following the first look posters the trailer of the entertainer is expected to be unveiled on social media soon.

The story of the flick is said to be based on a popular Tamil novel Thariyudan penned by author Bharathinathan. The novel takes us on a deep journey in to the world of cotton and textile industries that function in Coimbatore, Erode and in the western districts of the state. These industries are the source of survival for many people living in these regions. The novel lays light on the crucial issues faced by the people who work in the industries. The novel was a best seller; we will have to wait to see how the motion picture adaptation comes out. The plot of the story is very apt for actor Samuthirakani who just loves to depict the role of a rebel on screens.

VJ and actress Ramya Subramanian who was last seen in the adult drama Aadai alongside Amala Paul will be making her debut as a lead heroine in the movie. Apart from Samuthirakani and Ramya Subramanian, the casting of the film also has Sunu Lakshmi of Aram fame and Karunas portraying pivotal roles. Cinematographer Velraj has handled the cinematography department of the project. The entertainer should have hit the screens a long time ago but due to some reasons best known to the producer and director the venture got delayed. But it is now all shaped up and is ready to see the day light.