Thala Ajith never ceases to amaze people that he works with. Now it is the producer of his next film who has showered praises on the racer. Lately, the actor delivered a smash hit Visvasam under the directorial of his favorite director Siruthai Siva. Now the actor has wrapped up the shoot of his next film Nerkonda Paarvai, the official Tamil remake of super hit Hindi movie Pink starring Big B, Taapsee Pannu. The Tamil version of the film is directed by H. Vinoth.

The film is currently vigorously thriving in the post production stages and is expected to hit the screens on 10th of August 2019. The director has made some changes to the film in accordance to the taste of the Tamil audience and to suite the image of the actor.

Saw the rushes of #NerkondaPaaravai. Happy… What a performance by Ajith…. I hope he agrees to do Hindi films soon. Have 3 action scripts, hope he says yes to atleast one of them. #NerkondaPaaravai #Ajithkumar

Now the producer of the film Boney Kapoor has seen the rushes of the film and seems to be very impressed by the actor’s work. The producer who could not control his excitement took to his twitter handle to express his joy to his followers. The producer twitted that he just saw the rushes of Nerkonda Paarvai and he is happy with the way the film has come out. The producer immersed the fans of Thala in the epitome of joy by stating, ‘What a performance by Ajith.’ The producer further increased the dose of joy by stating ‘I hope he agrees to do Hindi films soon.’ Not stopping with that the producer went on to state that he has three action scripts and hopes that actor Ajith says yes to at least one of them.

This open invite from one of the big names in the Bollywood industry has sent the fans of the actor to the state of immense joy and they are expressing their joy on the social media by re-tweeting the tweet of the producer and now it has gone viral. 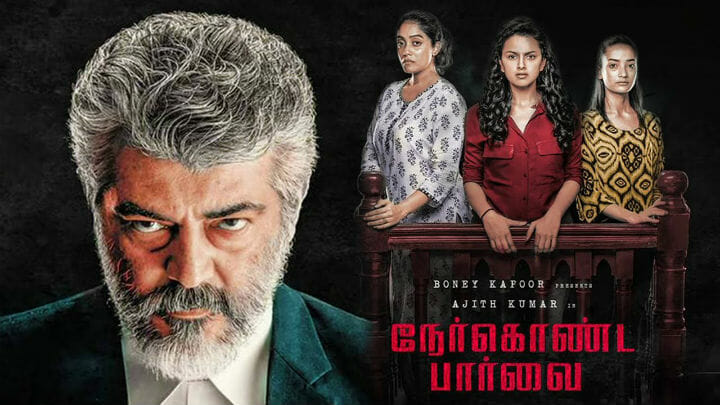 Apart from Thala Ajith the film has Shraddha Srinath donning the character of Taapsee pannu. The film has some heavy weights from Bollywod Vidya Balan and Kalki Koechlin who was brought on board at the last moment. Yuvan Shankar Raja has delivered a couple of songs for the movie along with composing the background score of the film.

On the work front, the actor has an interesting policy of never committing to another film while he his shooting for a film. However, the actor’s 60th film will be under the production of Boney Kapoor once again as announced earlier. But the question to who will be directing the film remains unanswered.

According to sources it is likely that director H Vinoth will again be directing the actor. But the recent meet up of Ajith and director Venkat Prabhu has set the K town on buzz as their last outing Mankatha was a blockbuster hit.