Veteran comedian actor Vivekh following his long gap from cinema makes his come back with a quality piece of art directed by film maker turned software engineer Vivek Elangovan. Though the debutant’s hard work is evident in the Vellai Pookal, the film falls short of being an extraordinary thriller as it lacks pace and vigor, the main components for a thriller. 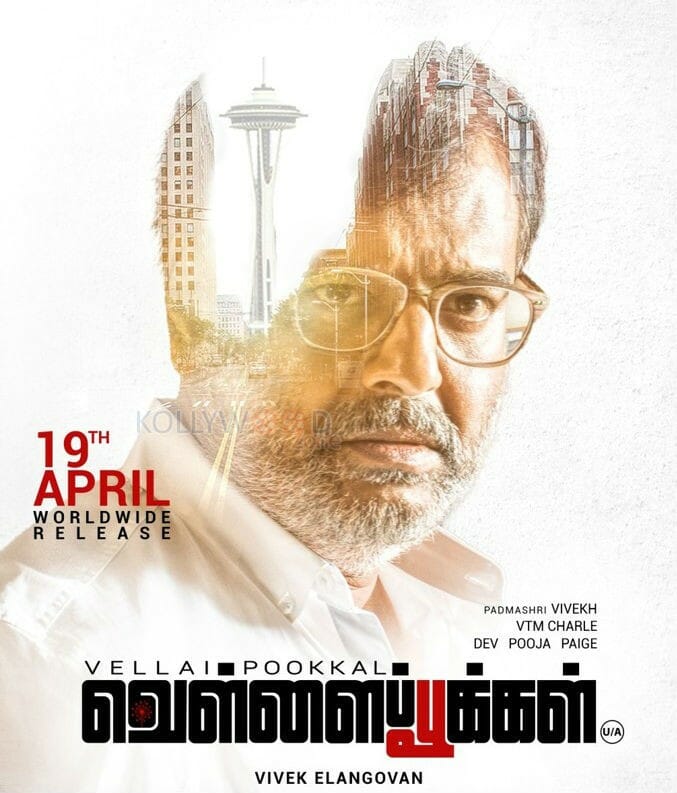 Rudhran (Vivekh) a retired police official decides to spend some time with his son Ajay (Dev) in United States, with whom he is not in good terms for a while because of Ajay’s decision to marry an American women Alice (Paige Henderson). Even after moving to United States with a mission to reconcile his relationship with his son, Rudhran maintains a friction with his daughter in law Alice and avoids having conversation with her. Rudhran’s days in the country turns out to be dull and mundane until he finds a friend in a retired banker Bharathidasan (Charlie) who happens to be living with his daughter Ramya (Pooja Devariya). Naturally, the inevitable happens, when two retried men strike a conversation, yes they begin to indulge in a conversation about their retired lives. When Rudhran recounts about the quietness in the country to Bharathidasan he comes up with a classic comparison that leaves an impact in us, he compares the retirement life to a test match and attests that the retirement live are meant to be quite.

Meanwhile, a kidnap takes place in the neighborhood which gets the attention of Rudhran and we know how policemen and military men operate even in their post retirement phase of life. Rudhran along with the assistance of Bharathidasan sets out to solve the case. Meanwhile, in another sub plot we get to see a mother and daughter held as captives and they are subjected to torture. While Rudhran is busy solving the mystery behind the case, his son gets abducted. Is there a connection between all these chain of events and if there is, then how are they connected is what makes up the crux of the film.

The addition of Actor Vivekh and Charlie is a smart choice by the casting department as they aptly fit in the characters they played as if it was tailor made for them. Both the actors have proven what experience can do to you with their cool and unruffled performances. As the story takes place in America we get to see many oversea actors in the film who have played their respective parts well.

Director Vivek Elangovan seems to be a big fan of thriller novels, it is safe to say that as we get to see a lot of deliberate attempts to bring in the case handling style of protagonist character from Agatha Christie’s and Sir Arthur Conan Doyle’s novels do. The attempts have turned out to be successful and likeable on certain scenes whereas in the majority of the scenes just stays as a mediocre replica.

In the technical arena Cinematography has fallen as a surprisingly astonishing package for a medium budgeted film as Jerald Peter has added a lot of strength to the movie. Ramgopal Krishnaraju has handled the musical instruments as required.

On the whole, Vellai Pookal is as a thriller film that can fill up your bored time space and deserves to be watched in theaters for the attempt made by passionate film unit from United States who possess great love for their Tamil native soil.