The duo Samuthirakani and Sasikumar is quite popular for their friendship in Kollywood. Right from their first association in the film Subramaniyapuram they both have managed to maintain a good relationship with each other. After Naadodigal the duo again teamed up for the sequel of the film. The film has Tamil Bigg Boss fame Bharani, Anjali and Athulya Ravi portraying important roles. Though the film was wrapped up long ago the film has not hit the screens yet. But even before the film hitting the screens, director and actor Samuthirakani has confirmed that the same team that worked on Naadodigal 2 is set to team up again for a flick. 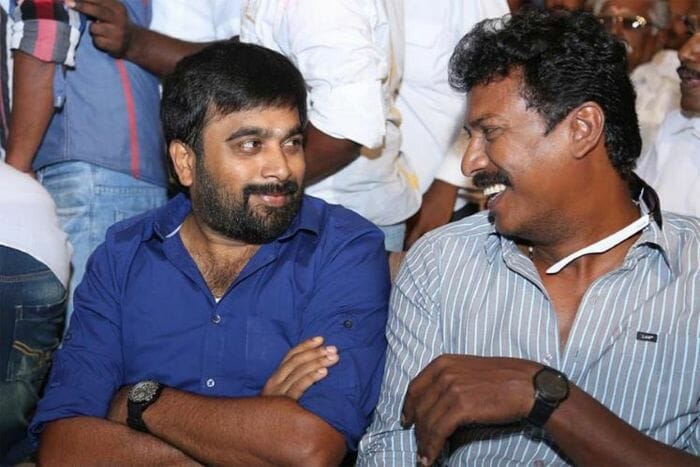 The director took to his twitter account to publicize the news, posting the first look of the film the director stated in a single word that they will win. The first look of the film had Samuthirakani and actor Sasikumar walking wrathfully holding their hands together. In the same poster the director confirmed the casting of the film too. The yet to be titled film will be bankrolled by director Samuthirakani under his banner Naadodigal. Since the director had announced that the same team will be uniting again, this news paved way for the speculation whether the project will be Naadodigal 3. But according to a source the project will be a fresh script and has no connections or whatsoever with Naadodigal. The film is expected to go on floors by the end of May.

On the work front, actor Sasikumar as his nature is mutely working on number of films currently. The actor who was last seen in the super hit film Petta is currently shooting for his untitled film directed by debutant director Kathir. The music for the film is composed by Sam C. S. Apart from this the actor has Kombu Vecha Singamda directed by Sundarapandian fame director S. R. Prabhakaran in which Malayalam actress Madonna Sebastian plays the female lead. Besides this venture the actor has Kennedy Club in which he will be sharing the screen space with ace director Bharathiraja and the flick will be directed by Suseenthiran.

Meanwhile, director Samuthirakani’s film Naadodigal 2 is set to have gone under some financial trouble and the reason for the delay in the release of the film is said to be the tussle between the director and the financier of the film. We hope everything goes well between them and the film makes it way to the theaters soon. The director is also having a busy acting career with Pettikadai, Kennedy Club, Kolanji, and Sillu Karupatti in his kitty.