Actress Ritu Varma made her debut in the tinsel town with a supporting role in the Telugu cinema Baadshah alongside actor Jr. NTR. Her first big break as a lead heroine came her way in the Telugu anthology drama Prema Ishq Kaadhal. After starring in a handful of Telugu movies she ventured in to Tamil cinema with a supporting role in the sequel of Velaiilla Pattadhari alongside actor Dhanush. Following it, she went on to play the lead role in the romantic comedy heist drama Kannum Kannum Kollaiyadithaal in which she shared the screen space with actor Dulquer Salmaan. The entertainer garnered positive reviews and actress Ritu Varma managed to draw the attention of young crowd in the state with her charm. The success of the film, earned her a part in Putham Pudhu Kaalai.

Like most of the actresses these days, despite her busy schedule the actress remains very active on social media. She regularly shares pictures from her sponsored shoots on her Instagram account to keep her fans entertained. Recently, the actress shared a couple of pictures on her Instagram handle in which she looks dazzling. The followers of the star actress have jumped right in and have poured thousands and thousands of likes and hundreds of comments appreciating her beauty. Even her colleagues have dropped comments appreciating her beauty. Actress Manjima Mohan has dropped fire smiley indicating the actress looks smoking hot. The pictures have gone viral. Here are the pictures the actress shared. 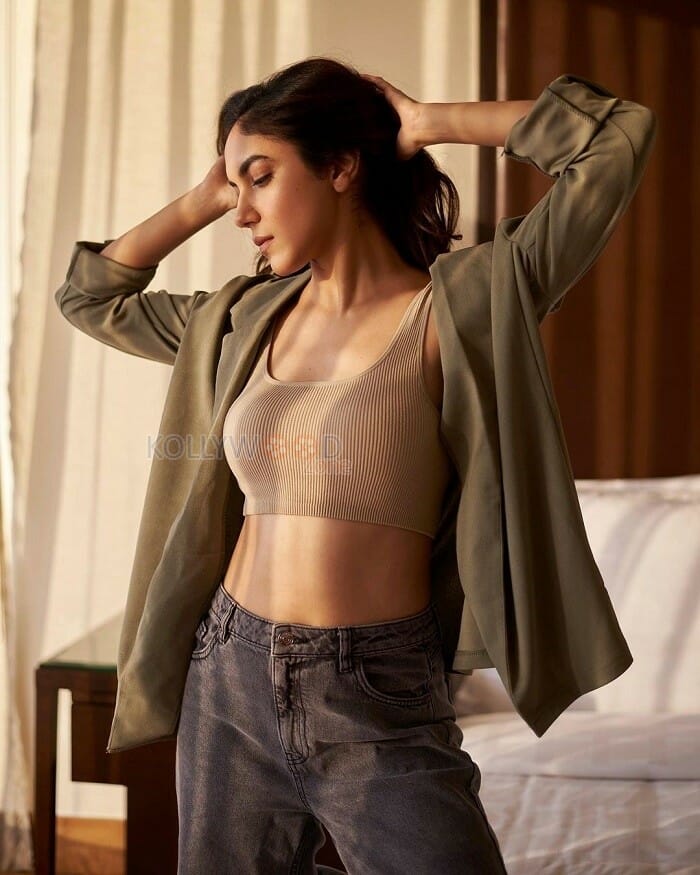 In the pictures the actress in seen donning a vibrant red colored thigh length sleeveless skater attire with a slender necklace shinning bright on her. The actress sports a confident and racy expression in both the pictures drawing our attention. In one of the pictures, the actress is leaning on to a hand wash sink and looks sideways. The other picture has a creative touch to the way it is shot. The actress looks at the mirror with a hand stretched towards it, and the image of her in the mirror is captured brilliantly. The lighting in the spot is done to perfection. It aids in emphasizing the actress’s glossy skin tone. One can say without reservation that actress Ritu Varma would be a best choice as a jewelry model.

On the work front, actress Ritu Varma who was last seen in Tamil cinema in the anthology drama Putham Pudhu Kaalai is gearing up for the release of her next Tamil film titled Nitham Oru Vaanam directed by R. Karthik in which she plays the pair of actor Ashok Selvan along with actress Aparna Balamurali. Following which she will be seen in her next Telugu drama Oke Oka Jeevitham in which she will be sharing the screen space with actor Sharwanand. Her next project is the long awaited Dhruva Natchathiram helmed by film maker Gautham Vasudev Menon in which she will be seen alongside actor Vikram. Apart from these completed flicks, the actress is yet to ink her signature for a Tamil project.