The stunning hottie Raai Laxmi, was last seen in theatre screens playing the female lead in the Mollywood movie ‘Oru Kuttanadan blog’, where she acted opposite to Megastar Mammootty, and is currently working in the film ‘Neeya 2’ opposite to Jai. This movie is a snake thriller and is directed by ‘Eththan’ director Suresh. The film also stars Catherine Tresa and Varalaxmi in pivotal roles. 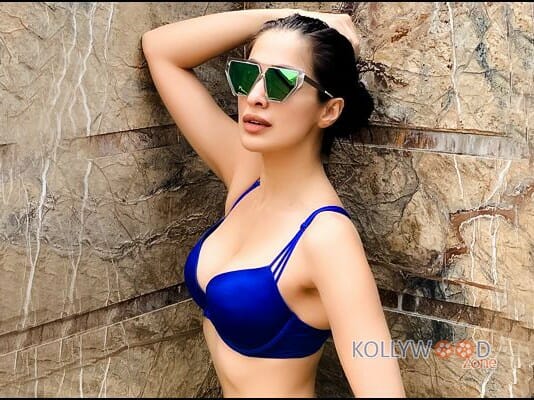 In the recent times, Raai Laxmi had been shaking legs for special songs in flicks line ‘Motta Shiva Ketta Shiva’, and the Tollywood movies ‘Sardar Gabbar Singh, ‘Khaidi No 150’ and more. She had also made her debut in Bollywood industry as a female lead in 2017 thriller movie ‘Julie 2’. Even though the film, was not a box office hit, Raai Laxmi created buzz with her bold bikini avatar, which was the first time in her acting career.

Once again Raai Laxmi has created a buzz, as the heroine who is proactive in social media and regularly posts her hot selfies released a picture of her wearing a blue bikini, on the new year eve, wishing her ardent fans, also promising to release the full pic in 2019. This picture of the Raai Laxmi has gone viral, and fans of the heroine are eagerly waiting for her next update. The heroine sure knows the trick to keep her fans hooked up with her social media activities.