Actor Prabhu Deva the dance sensation turned hero is one of the busiest artists in Tamil cinema at the moment. The actor is on wheels between multiple sets shooting for various dramas. The actor has completed 27 years in cinema and has reached the 50 projects milestone mark. The actor was last seen on screens in My dear Bootham which hit the theaters last week under the direction of Ragavan with actress Remya Nambeesan as female lead. The drama had a mixed response among the audience and critics. Now, the actor has moved on to his next flick titled Bagheera. The film is directed by film maker Adhik Ravichandran who had previously helmed the adult entertainer Trisha Illana Nayanthara with actor G. V. Prakash Kumar in the lead role. Actress Amyra Dastur of Anegan fame will be playing the female lead role in the entertainer. The trailer of the drama which was unveiled by the production unit a couple of months back enjoyed a good reception among the audience and has clocked millions of views.

Now, the production unit has shared the release date of the entertainer on social media. Director Adhik Ravichandran himself has shared the news. Taking to his official twitter account, the director shared a poster from the movie and wrote, “Real Independence Day for soup boys Bagheera releasing on Aug 11th Prabhu Deva and R. V. Bharathan. Songs & final teaser soon.” Here is the post shared by the film maker. 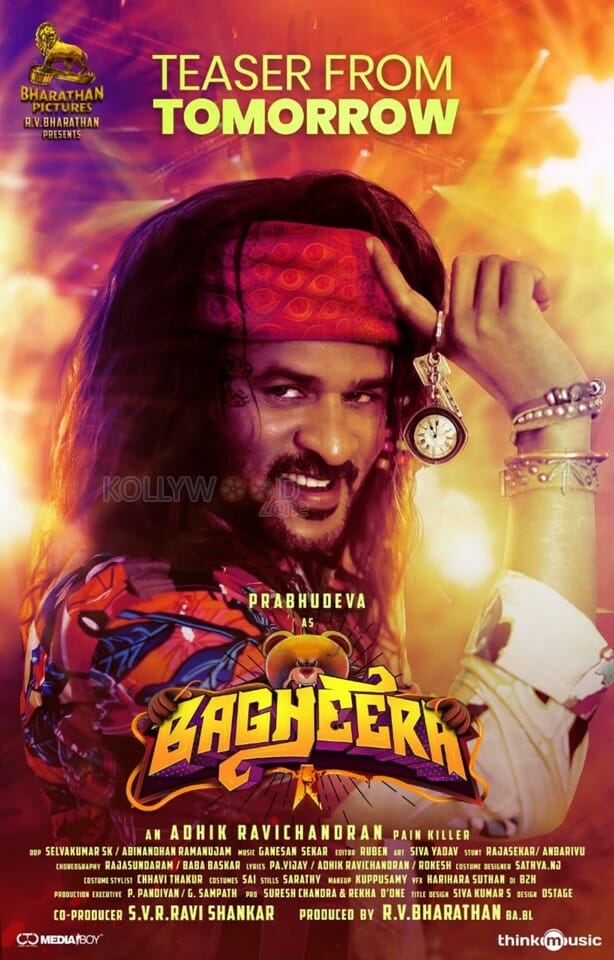 The cinematography for the film has been done by cinematographers Selva Balraj, Abinandhan Ramanujam, and S. K. Selva Kumar. Music director Ganesh Sekar has composed the music for the movie. Already a number ‘Psycho Raja’ has been released by the team which has found its way in to the playlist of teens in the state. Editor Antony L Ruben has been bestowed with the responsibility to trim the flick. The Anbariv duo has choreographed the action sequences for the flick. The entertainer is bankrolled by R. V. Bharathan along with S. V. R. Ravi Shankar under the production house Bharathan Pictures.

On the work front, actor Prabhudeva who was last seen in the child fantasy flick My dear Bootham is currently shooting for his upcoming project title Rekla under the direction of story teller Anbu in which he is set to romance actress Vani Bhojan, for Oomai Vizhigal filmed by V. S. in which he has collaborated with actress Mamta Mohandas, for Flash Back scripted by director Don Sandy in which he will be seen alongside actresses Regina Cassandra and Anasuya Bharadwaj, for Poikkal Kuthirai directed by Santhosh P Jayakumar in which he has shared the screen space with actress Varalaxmi Sarathkumar, and for his Kannada project Lucky Man. Apart from these ventures, the actor has his long-delayed movie christened Yung Mung Sung directed by M. S. Arjun is on the shelves waiting to see daylight.

Director AL Vijay squeezed me for the making:...

Vishwaroopam 2 is all set to rock your...