Kamal Hasaan was found reminiscing when asked about his reaction on the sad and untimely demise of the first female Superstar of the nation, Sridevi. While speaking at a Conclave, Mr. Kamal Hassan lovingly remembers his co-actor with whom he has been the most number of times paired on screen for romantic roles. Yet they had a great on-screen chemistry, they were like siblings in reality and gives credit to her outstanding acting skills for having so convincingly pulled off those roles in spite of their innocent brother-sister relationship. 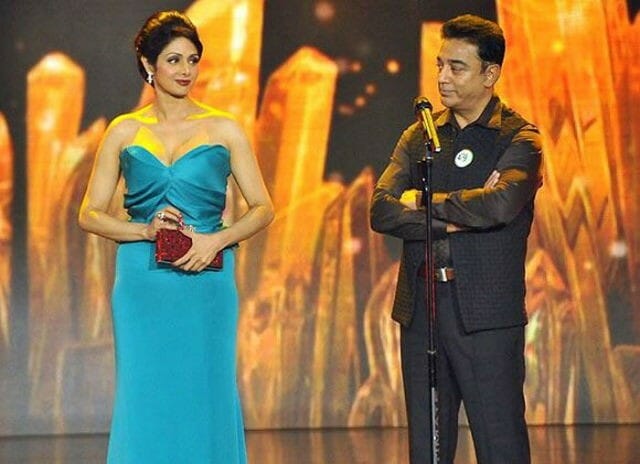 Recollecting their first meeting he says that he met Sridevi when she was around 15 or 16 years of age. He fondly draws the parallel of brother and sister in a family dressing up as Radha and Krishna during the auspicious occasion of Janmashtami and Sridevi and him playing the roles of husband and wife or lovers on screen. He adds on that the late actress and himself often laughed at the fact how this off screen brother and sister were made to do romantic things for their movies. Kamal Hassan was in absolute praise of his colleagues acting skills and said that she as an artist had a bag full of tricks with which she over the years have enchanted the audience, such was her charisma. Remembering the departed soul, he crooned the song ‘Surmayee ankhiyon mein’ from their film ‘Sadma’.