Finally, the Tamil film makers have realized that it is high time to explore different genres and their decision acts as a light at the end of the tunnel for Tamil cinema which has almost submerged in to the formulaic film making. At last Tamil audience are beginning to get films that explore life (Super Deluxe), which has admirable fantasy elements (Enthiran 2.0), that is based on animals, etc. Last week it was one such flick titled Monster starring SJ Surya, Priya Bhavani Shankar and our little intellectual rat in the lead roles that entertained people. Tamil cinema audiences still have animal based entertainers this year to treat themselves to in the form of actor Jiiva’s Gorilla and debutant director’s Thumbaa. 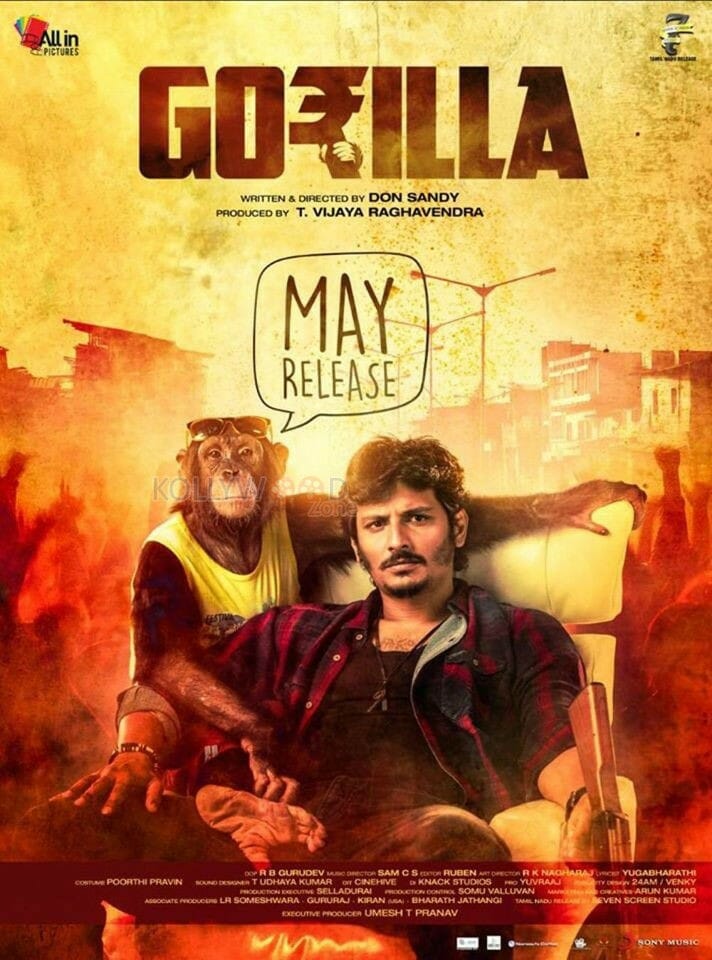 Actor Jiiva who has had a rough couple of years is finally regaining momentum to get back the market that he has lost with two of his flicks Gorilla and Gypsy are set in his pipeline to be released back to back. On Saturday evening, the production unit of Gorilla publicized that the film would be hitting the screens on 21st of June, while the audio launch for the film will be held on 24th of May. The film was initially planned to hit the screens on 17th of May, it had to be postponed as the post production works for the film consumed more time than planned. Being an animal based flick it is quite understandable.

Interestingly actor Jiiva’s Gorilla will not be the only animal based film that would be releasing on the date. Gorilla will be locking horns with the new comer director Harish Ram who has boldly chosen this genre as his first project.

However, ever since the teaser of Gorilla was unveiled by actor Surya, the expectations for the film are quite high. Also the plot of the film that is set up on a gang of misfits and their efforts to put to use the assistance of a Gorilla to steal from a bank has caught the attention of a lot of cinema audience in the state. Apart from actor Jiiva, the film has Shalini Pandey in the female lead role while Yogi Babu, Sathish, Radha Ravi, Rajendran and Ramdoss will be playing various other important supporting roles. The film that is directed by Don Sandy will be bankrolled by Vijay Raghavendra under his banner All In Pictures.

On the other hand, Thumbaa will be a full-fledged jungle adventure film. The director had recently stated that the film will have a lot of VFX which will be a treat to the audience. The cast and crew of the film are nearly filled up with the names of debutants while for hero Dharshan it will be the second flick after Kanaa. Debutant Keerthi Pandian is set to romance Dharshan in the film.

While Tamil cinema awaits the release of two animal based films on the same day, we will have to wait to see who outdo who in the box office.

Director M. Rajesh to Direct Thani Oruvan Star in His...

Anushka decided not to act in Tamil movies temporarily