Film maker Karthick Naren ventured into Tamil cinema with his splendid neo noir crime thriller Dhuruvangal Pathinaaru which received critical acclamations from both audience and critics. Unfortunately, his sophomore flick Naragasooran ran into financial trouble. Hence actor Dhanush starrer Maaran became his second drama. Now, the director is gearing up for the release of his next drama Nirangal Moondru which has actors Atharvaa Murali, Rahman, and Sarath Kumar in the lead roles. The entertainer which went off floors some time back with a small pooja ceremony is now wrapped, and is in the post production stage shaping up for release. Now, we have an interesting update on the project. 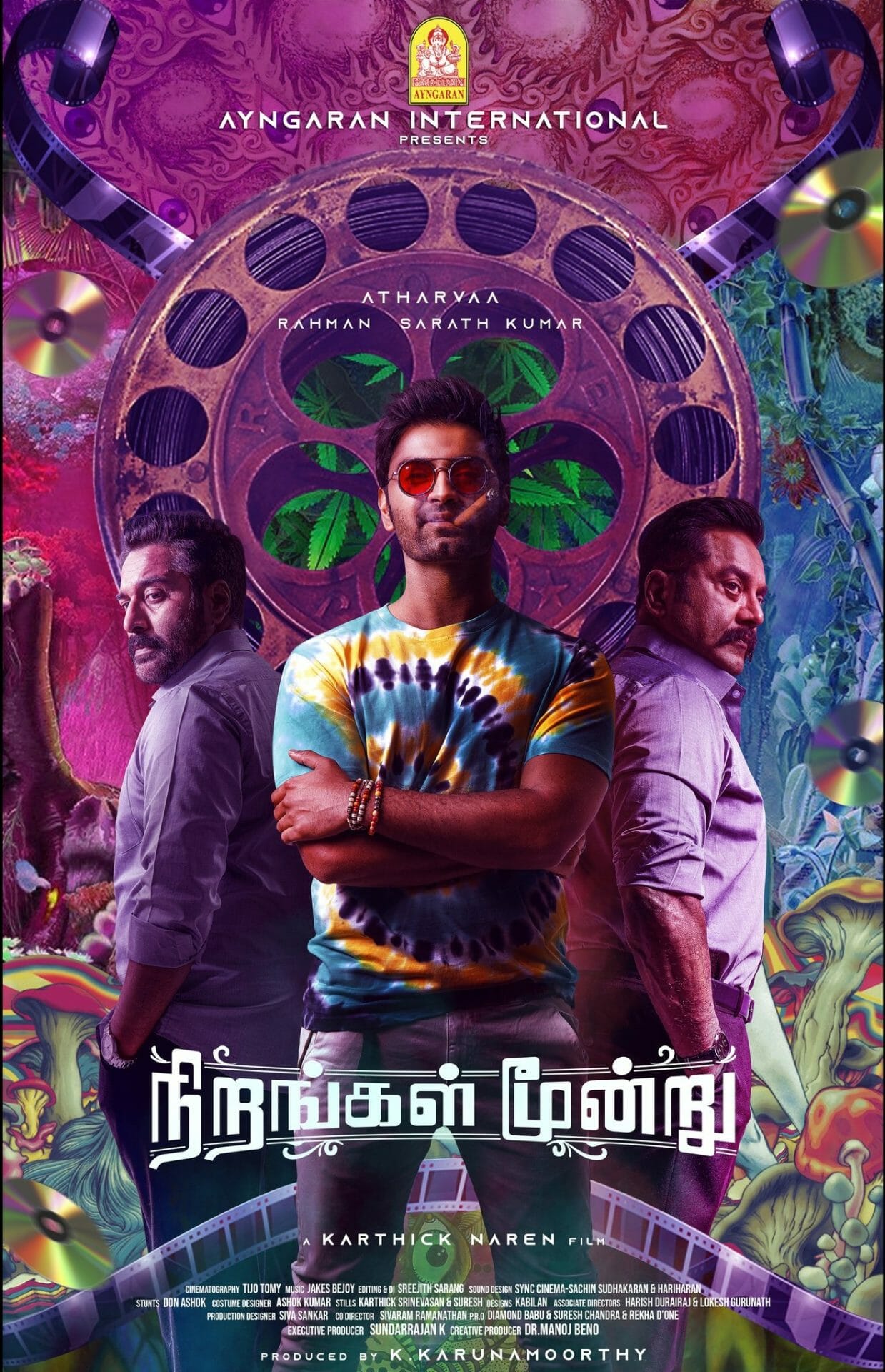 We have news that the dubbing work of Nirangal Moondru is completed. Director Karthick Naren himself has shared the news on social media, and has announced that the trailer of the flick will be out soon. Taking to his official Instagram story the director wrote, “Done with the dubbing of Nirangal Moondru. Will be unveiling the trailer soon! Stoked about this one.” Earlier talking about Nirangal Moondru to a leading media house in the state, producer K Karunamoorthy said, “Nirangal Moondru is a hyperlink movie with Karthick Naren’s touch to it. The film holds a lot of surprises powered by strong characters for the viewers. I am certain that the audience will love it.”

Apart from actors Atharvaa Murali, Rahman, and Sarath Kumar, the casting department of the entertainer has actors Dushyanth Jayaprakash, Chinni Jayanth, and John Vijay in various other supporting roles. This is the second time actor Rahman is teaming up with director Karthick Naren after Dhuruvangal Pathinaaru. Music director Jakes Bejoy has handled the musical instruments for the flick. Cinematographer Tijo Tomy has been behind the lens for the drama. Editor Sreejith Sarang has been bestowed with the responsibility to edit the entertainer. Stunt Master Don Ashok has designed the action blocks for the venture. The project is bankrolled by K Karunamoorthy under the banner house Ayngaran International.

On the work front, actor Atharvaa Murali who had his last outing in the likes of the action-drama Pattathu Arasan is currently busy shooting for his upcoming project christened Vanangaan helmed by story teller Bala in which he will be sharing the screen space with actress Krithi Shetty. Apart from these movies, the actor has Othaikku Oththa crafted by Barnesh in which he has romanced actress Vidya Pradeep, Address filmed by film maker Raja Mohan, and Rukkumani Vandi Varudhu scripted by Raja Mohan in which he has co starred with actress Pooja Jhaveri, in various stages of post-production getting refined for release. On the other hand, actor Rahman who was last seen on screens in Tamil in Ponniyin Selvan: part 1 is currently busy shooting for his next Malayalam venture titled Ethire under the direction of story teller Amal K Joby in which he will be collaborating with actor Gokul Suresh. Following which the actor will soon begin to shoot for his next project Blue which is set to be helmed by Venu Nair with actress Aparna Nair in the female lead.

Actor Sarath Kumar who was last seen on screens in Ponniyin Selvan: part 1 is gearing up for the release of actor Vijay starrer Varisu helmed by Vamshi Paidipally. He is currently busy shooting for his upcoming flick titled The Smile Man directed by story tellers Syam and Praveen, for Paramporul directed by C Aravind Raj in which he will be co starring with actor Amitash Pradhan, and for an untitled movie crafted by Dakshinamoorthy Ramar in which he will be sharing the screen space with actor Gautham Karthick. Apart from these ventures, the actor has his long-delayed Tamil movie Rendavathu Aattam filmed by Prithvi Adithya, and Kannada drama Raymo crafted by Pavan Wadeyar awaiting release.