Kollywood audience have begun to witness many multi starrer flicks recently which is a healthy sign for Tamil cinema as it is the best fortuity to get rid of the films that glorify or gyrate around a single personage. There are also quite a number of multi starrer movies in the making that will be hitting the screens soon and Sivappu Manjal Pachai is one among them. The flick has actors G. V. Prakash Kumar and Siddharth in the lead roles. The duo has already worked together for Udhayam NH4 but in technician-actor mishmash. Sivappu Manjal Pachai will be there first flick as co stars which has created a huge expectations among their fans. 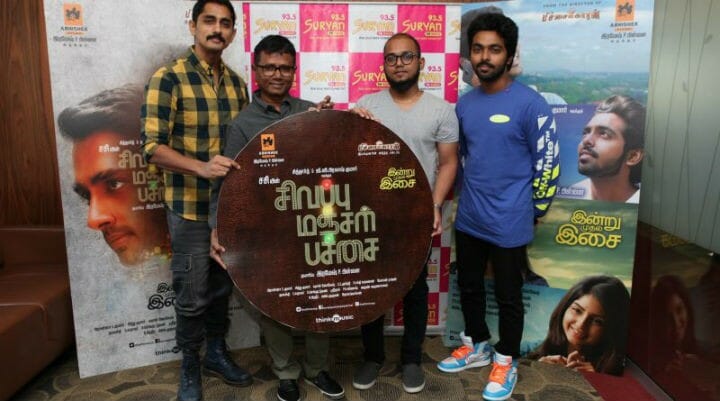 Now we have an update on the film that was recently wrapped up. The audio of the film was launched yesterday in a simple manner at Suryan FM, one of the popular radio stations in the city. Taking to their official twitter page, Think Music has publicized the audio launch of the film by sharing few pictures from the launch. Musician and actor G. V. Praksash Kumar has also shared a video of him and actor Siddharth from the launch event. The production unit had already released three single tracks from the film Uyire, Mailaanjiye and Raakaachi Rangamma. Out of the three Uyire and Mailaanjiye has already taken its place in the playlist of many in the state. Since the flick has musician G. V. Prakash Kumar as an actor, the musical department has been handed over to Siddhu Kumar.

The emotional thriller film will hit the screens under the directorial of director Sasi of Pichaikaaran fame. Apart from actors G. V. Prakash Kumar and Siddharth, the film has actors Lijomol Jose, Dheepa Ramanujam, Kasmira Pardeshi and Prem Kumar in various other pivotal roles. While cinematographer Prasanna was behind the camera for the film, Lokesh will be editing the flick. The flick is bankrolled by Ramesh S. Pillai under the banner Abishek Films. The flick is expected to hit the screens soon.

On the work front, actor and musician G. V. Prakash Kumar has a very busy year ahead as an actor as well as, as a musician. The actor, who is currently gearing up for the release of his film 100 % Kadhal, is busy shooting for his film Jail under the directorial of critically acclaimed director Vasanthabalan. The actor also has Ayngaran, Adangathey, 4G, and Kadhalikka Yaarumillai in his kitty.

On the other hand, actor Siddharth is currently shooting for his flick Aruvam and he also has a Tamil project named Shaitan Ka Bachcha, and a Hindi flick titled Chhichhore in his pipeline. Besides these projects the actor is also gearing up for the premiere of his Hindi Tv series Leila, which can be streamed from 14th of June on Netflix.