The young and talented film maker garnered the attention of cinema goers in the state with his flicks such as Kadhalil Sodhappuvadhu Yeppadi, Vaayai Moodi Pesavum and Maari all the projects were not only critically acclaimed but also excelled commercially as well. But the director’s last outing with the sequel of his block buster hit Maari failed to bring in more footfalls to the theaters. But putting aside it the story teller has moved on to the next phase of his life by launching his own production venture under the name Open Window. Even before the official launch of his production house Open Window Balaji Mohan had bankrolled a web series titled as ‘As I’m Suffering From Kadhal’ under the same banner. 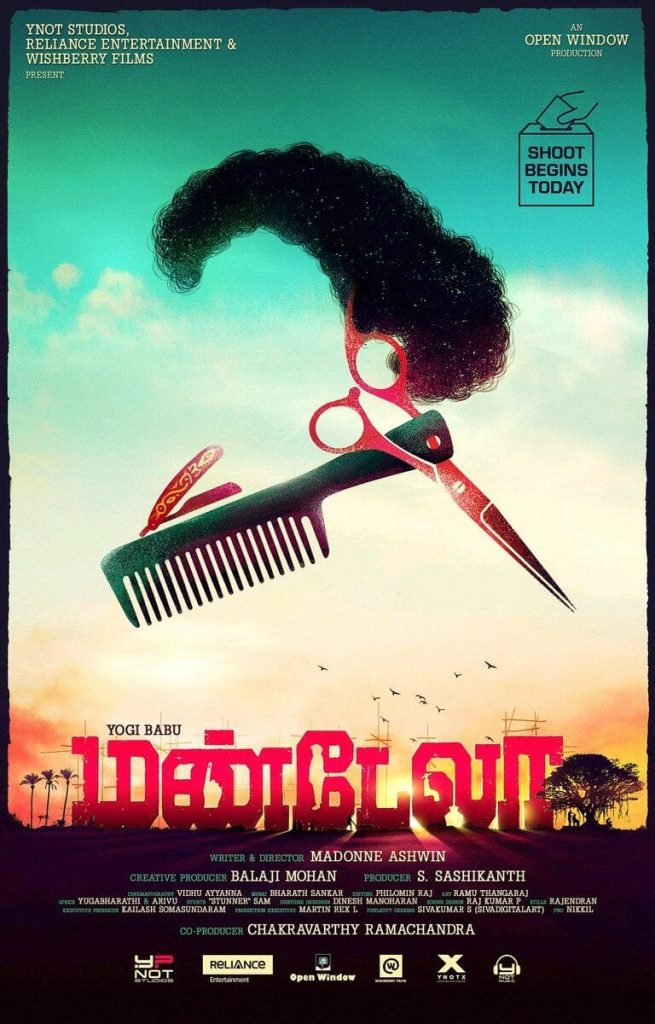 Shortly after the announcement of his production venture he also stated that he would be co-producing his first film. Now, we have important updates about his maiden production. The director turned producer has now revealed the title of the project on social media. The film is named as Mandela and is set to be directed by debutant film maker Madonne Ashwin. Taking to his twitter handle Balaji Mohan himself has shared the information along with a couple of title posters. Sharing the posters the director wrote, ‘Here’s the title poster of our first feature film production Mandela! An Open Window production. So happy to collaborate with YNot Studios, Reliance Entertainment and Wishberry. Written and directed by debutant Madonne Ashwin starring Yogi Babu & others.’ We wish the new producer all the very best and success on his new venture in life.

The poster of the flick hints that this project has something to do with the profession of Barber as it has the images of comb, scissors and hair put together. With all these on our sight one might make a straight guess that actor Yogi Babu might play the role of a barber in the comedy drama. And also the title of the venture has made many minds wonder as it is also the name of one of the greatest world leaders Nelson Mandela. It has also paved wave for the question whether the flick would be a social drama with a social message. The poster has got the audience curious and for sure has garnered the necessary initial attention for the movie. The project went on floors yesterday with a formal pooja in Chennai.

The musical instruments for the movie will be handled by Bharath Shankar. The cinematography department of the entertainer has been handed over to Vidhu Ayyana while the editing department will be taken care of by Philomin Raj. The rest of the cast and crew that will be working on the project are expected to be announced soon. The story teller had delivered back to back hit films and kept the box office registers ticking. But we will have to wait to see whether his debut production will replicate the success that he tasted on his directorial debut.