Avengers: End Game is the current trending topic not only across all social media but also in our day to day life. In our work places, public transports, educational institutions, and even in our home all we keep hearing is, “Have you booked the tickets for Avengers: End Game?” Such is the popularity of the film. People all over the world are very eager to see who will be the one that is going to take on Thanos and end the game or could it be a new beginning? We will have to wait till the 26th of this month to find that out. 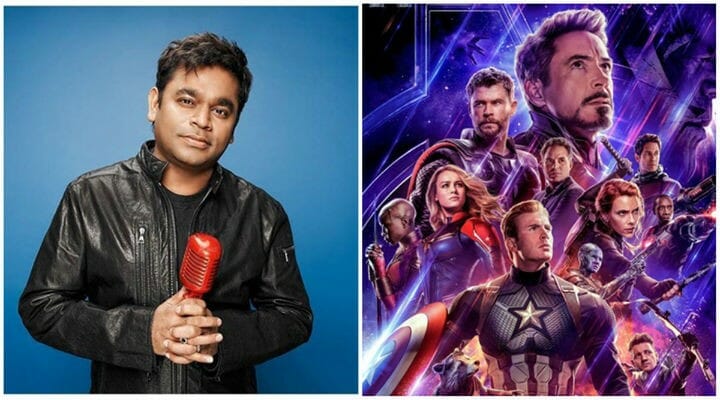 The film, not only in the western world but even in India, has created huge expectations. The film is set to release in multiple languages in India including Tamil, Telugu and Hindi. Few days back director Joe Russo while promoting his film in India revealed an interesting news about the connection between Enthiran and Avengers – Age of Ultron. The director reveled that a scene from the movie Enthiran inspired the climax of Avengers – Age of Ultron.

Actor Vijay Sethupathi has given his voice for Iron Man while actress Andrea has lent her voice for Black widow in the Tamil version of the film. This has further pushed the K town audience in to the state of excitement as they were already too eagerly waiting for the movie.

Oscar winning director AR Rahman has scored an anthem for the popular franchise and it is already in the play list of many being played in the repeat mode. On Thursday night, the music sensation met the press to launch the Tamil version of the album that was attended by actor Vijay Sethupathi, actress Andrea, lyricist Vivek. The musician was in a very funny mood and asked the press people present in the meet to close their eyes as he did not feel comfortable to shake his leg for the anthem.

When asked about director Joe Russo’s comment on the connection between Avengers: Age of Ultron and Enthiran, the movie he scored the music for, the music director said, “I am glad that our film has inspired someone in their work. Particularly, it is good to get such a comment from the West. We, as a nation, never appreciate our men for their exceptional work and we never want to give the credit to them. From time to time we have to give credit where it is due,” the musician concluded. It feels that as the musician stated our men deserve more appreciation from us for the work that they did as they have made us very proud on the world stage.

With so many Kollywood names linked to the film it has set the stage ready for team Avengers to battle it out with Thanos for one last time.