Director and actor Vijay Kumar after the commercial success of Uriyadi came up with the sequel of the movie Uriyadi 2 that hit the screens this weekend. The film that hit the screen as underdog in comparison to Natpe Thunai and Kuppathu Raja has overcome them to place itself on the number spot in the box office collection. The main reason for this is said to be the positive reviews that the film managed to obtain from the critics. Also with the word of mouth from the audience about the film being good the film is gaining more screens across the state. 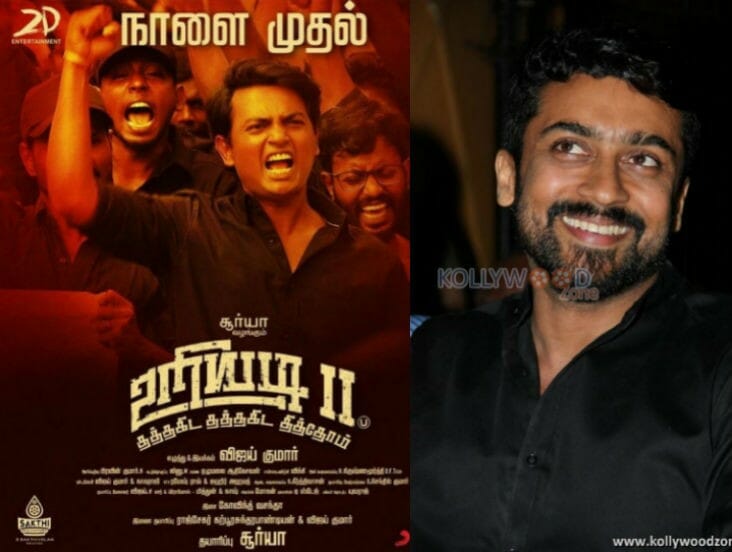 The act of actor Suriya presenting special Macbook Pro to the team after watching the preview of the film gave the film the initial boost that it required. Being a socio political drama comprising many contemporary issues happening in the state the film raised all right questions to the society, as the reflection of which the Tamil audience seems to have embraced the film and given it the official recognition that the film deserves.

Under the banner Sakthi Film Factory the film was distributed by Sakthivelan. The distributor along with Rajsekar Pandian, Vijay Kumar and the rest of the team celebrated the success of the film by having a cake cutting ceremony in Chennai on Sunday. He seemed a very happy person, why will he not be as the film has opened to a good response from the audience and has done well in the box office too, collecting 3.20 Crore in three days.

The distributor could not control his excitement and he took to his twitter account to express his happiness with his followers. Posting few pictures from the celebration ceremony Sakthivelan expressed his gratitude to Suriya and Rajsekar Pandian for giving him the opportunity to be associated with the film. He has mentioned that he feels more than happy and blessed to be associated with Suriya. He also proudly stated that the 2D Entertainment from its dawn has been offering only content driven and appreciable films to the Tamil cinema. 2D Entertainment has produced some quality films like 36 Vayadhinile, Pasanga 2, 24, Magalir Mattum, Kadai Kutty Singam.

Sakthivelan’s association with actor Suriya happened in the film 36 Vayadhinile starring actress and Suriya’s wife Jyothika, the distributor released the film and later the film Magalir Mattum that came after that as well. He has also released Suriya’s younger brother Karthi’s film Kadai Kutty Singam.

Vikram’s Cobra Is Scheduled To Hit The Theaters...