Andrea Jeremiah’s Next Project Is Funded By Vetri Maaran!

Andrea Jeremiah is one of the most talented artists as well as a controversial name in Tamil cinema. The actress who was last seen in Aranmanai 3 last year is getting ready for a consecutive release this year. Recently, the trailer of two of her movies Kaa and Pisaasu 2 were launched online and enjoyed a great reception among the audience clocking millions of views. The Taramani actress who revived her career with her vital part in Vetrimaran Vada Chennai has now starred in a flick funded by the director. The venture is directed by debutant film maker Kaiser Anand R. The shooting for the drama has been wrapped and the movie is getting shaped in the post production for release.

Now, the production house has unveiled the first look poster of the flick along with the title on social media. The drama has been christened Anal Mele Panithuli. Taking to his official twitter account the director himself shared the first look poster of the film, and expressed his gratitude to everyone who has helped him on his journey, “My lifelong thanks to Aadhav Kannadhasan who has always been a constant support, for having pushed me through tough times. Andrea Jeremiah for having agreed to Act in the movie and for taking me to Vetri Maaran sir, who has been an amazing producer! Thank you.” Here is the post shared by the film maker. 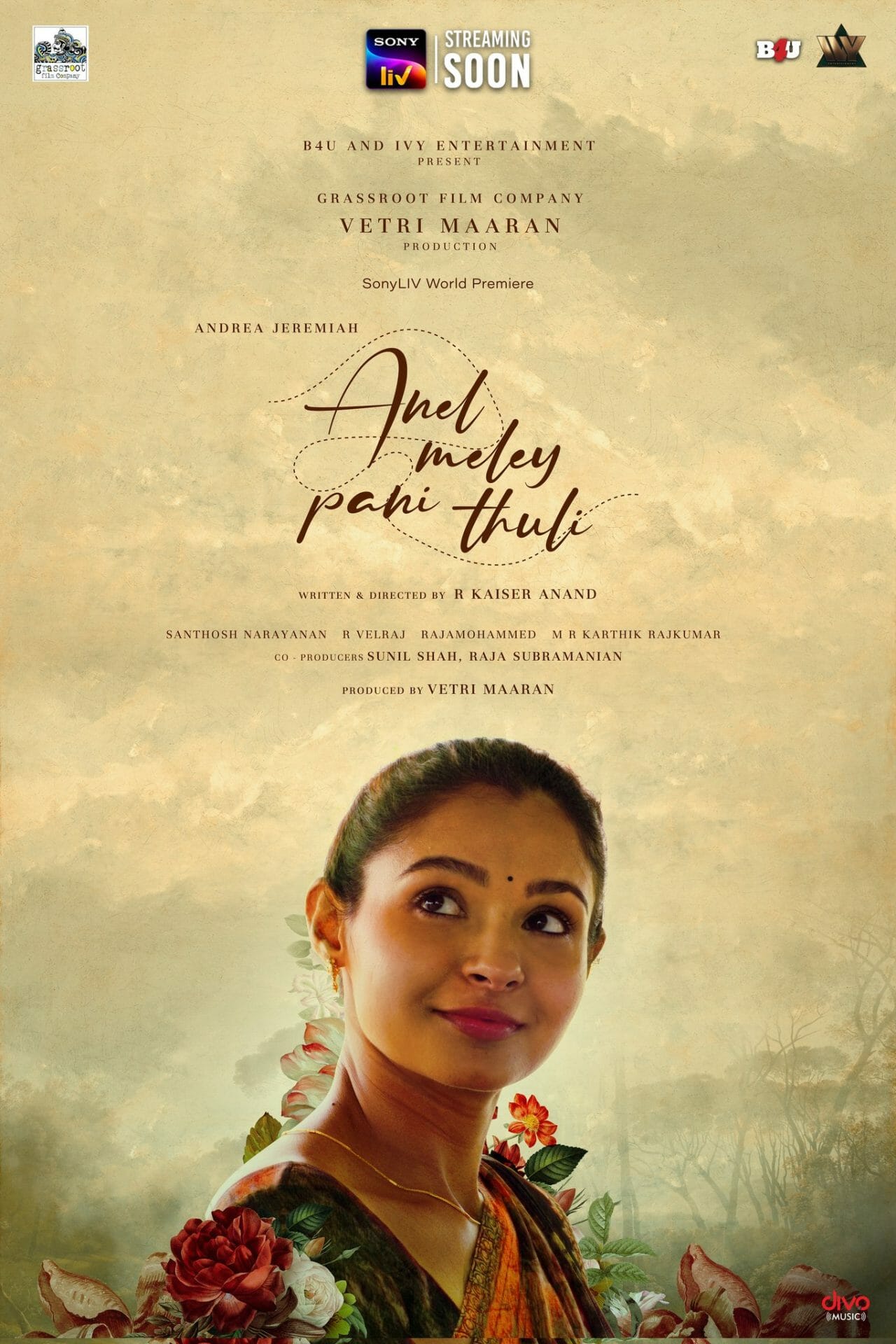 The first look poster gives us a sense of serenity. In the poster, actress Andre Jeremiah is seen in a traditional attire, sporting a calm smile. The CG work has flowers embedded around her physic. It looks like a hint that the character has some sort of connection with nature. It is safe to assume so, given the nature in the background. The first look poster of Anal Mele Pannithulli has managed to pique our curiosity. It would be interesting to catch the trailer of the drama. The production house chose to avoid the theatrical release, and instead has opted for an OTT release. The venture is all set to be released on Sony LIV OTT platform. The production house is expected to make an official announcement on the release date in the coming days.

The rest of the cast that are part of the film will be shared soon. The music for the venture has been composed by Santhosh Narayanan. The cinematography department of the flick has been handled by ace cinematographer R. Velraj. The entertainer is edited by Rajamohammed. The thriller drama is bankrolled by storyteller Vetri Maaran under his banner house Grassroots Film Company.

On the work front, actress Andre Jeremiah who was last seen on screens in the third installment of the Aranmanai franchise is currently busy shooting for her next venture titled Vattam in which she will be sharing the screen space with actor Sibi Sathyaraj, and for couple of untitled projects helmed by film makers Bobby Antony and Dinesh Selvaraj. Apart from these movies, the actress is gearing up for a back to back release in the likes of Pisaasu 2 directed by storyteller Myskkin, Maaligai helmed by Dil Sathya, No Entry shot by film maker Alagu Karthik, and Kaa directed by Nanjil.