Actor Vishal is in to many things at the current phase of his career. From actor’s association president to producer council head, he has his legs on many things. But that does not stop him from dishing out films at higher rate. The actor was last seen on screens in the action entertainer Ayogya, an official remake of super hit Telugu drama Temper which hit the theaters under the directorial of Venkat Mohan. The flick opened up with mixed reviews from the critics in the industry and did not do well commercially as expected. The actor is currently busy with his venture which is helmed by story teller Sundar. C. Now, we have an important update on the venture. 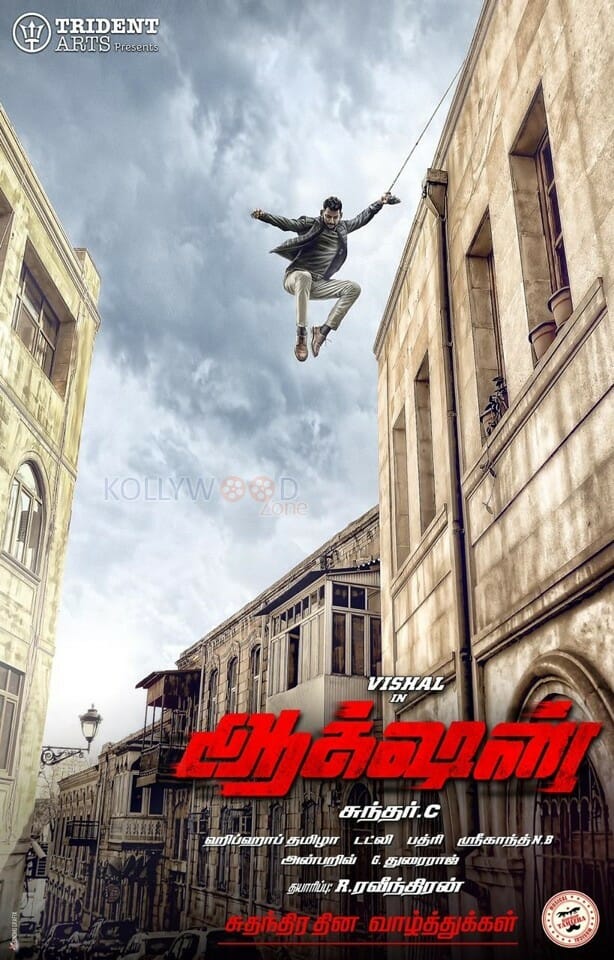 The mass action entertainer went on floors in Turkey without a title. Now, the production unit has unveiled the title of the flick on social media. The action entertainer is named as Action. Producer and wife of Sundar C, Khushboo has shared the title of the film along with the first look poster on social media. Taking to her twitter handle, the actress shared the first look poster of the movie and wrote, ‘Here is the first look Trident Arts, R. Ravindran presents Vishal, Sundar C’s next titled Action! If this poster excites you, movie will be more than that.’ In the poster actor Vishal is seen in the mid air after taking a jump from a tall building with the assistance of a rope in one hand. Guess as actress Khushboo stated the film will have a lot to offer us in terms of action sequences.

Major portions of the film have been shot in the picturesque locations of Turkey and Azerbaijan. Actress Tamannaah Batia will be romancing actor Vishal in the moviee for the second time after Kaththi Sandai. The actress has been sharing a lot of pictures from the shooting spot on her social media handle. Apart from Vishal and Tamannaah Bhatia, the film also has actors Yogi Babu, Kabir Duhan Singh and Aishwarya Lekshmi in pivotal roles. The music for the flick will be composed by Hip Hop Adhi who has been a regular in Sundar C’s films. The camera for the film will be handled by Dudlee while N. B. Srikanth will be taking care of the editing department of the entertainer. Stunt master Anbariv is said to have choreographed some high octane action scenes for the project.

Actor Vishal’s last outing with Ayogya did not fair in the box office as expected and the actor who is juggling between many things in the industry is desperately in need of a hit under his name to reinstate his place in the industry as a saleable lead hero. Director Sundar. C also did not have a good last outing with Vanthaa Rajavathaan Varuven with actor Simbu in the lead role and is said to be working hard to deliver a hit movie. We will have to wait to see how Action turns out for both the artists.

On the work front, actor Vishal after wrapping up Action will be joining the sets of story teller Myskkin for the sequel of Thupparivalan which is also set to be shot in various overseas countries.