The multi facet artist Parthiepan was recently on news after his experimental drama titled Ottha Seruppu size 7 made its way to the Asia Book of Records as well as the India Book of Records for a feat of single man taking care of multiple departments like writing, directing, acting and funding a movie. The actor also received acclamations from super star Rajinikanth after the actor watched the special screening of the film. Now, actor Parthiepan who was last seen on screens as baddie in the action entertainer Ayogya which had actor Vishal in the lead, is gearing up for the release of his next action comedy heist film which is titled as Thittam Poattu Thirudura Kootam. 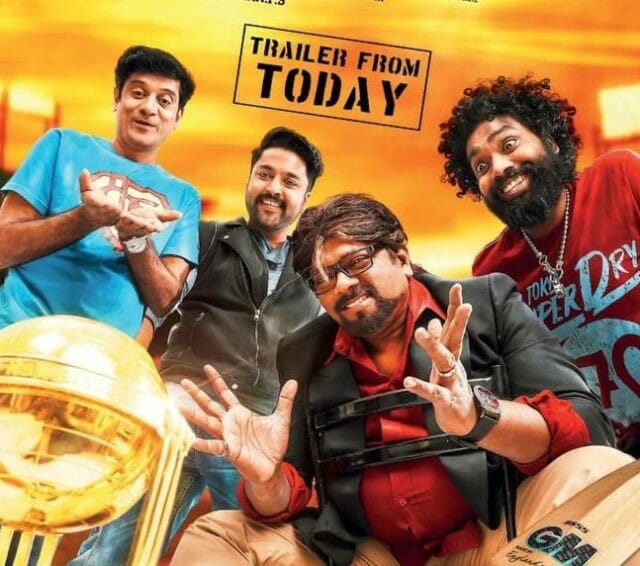 The venture went on floors in the year 2016 and was wrapped up in a very short span of 37 days. But due to some financial issues best known to the producer the venture has been put on hold for a long time. But finally everything seems to be sorted out and the film is going to see the day light very soon. And ahead of the release the production unit has shared the trailer of the entertainer on social media. The trailer of the comedy drama promises to be a fun filled entertainer. From the trailer, one can comprehend that the flick is based on stealing the world cup trophy won by India in the year 2011 against Sri Lanka. A group of cricket enthusiast with the assistance of a local don makes plans to steal the trophy. The film depicts their attempts in a hilarious way. Though the theme is quite weird the trailer seems to be fun but we will have to wait to see whether the movie entertains the audience.

The comedy movie is scripted and directed by debutant story teller Sudhar of Naalaiya Iyakkunar fame. Actor Chandran of Kayal fame is playing a role of an IT employee in the flick while Parthiepan has donned the character of a local don. Apart from them the casting of the project has Satna Titus, Chaams, Daniel Annie Pope and Arjai portraying various other supporting roles. The music for the film has been composed by Ashwath. Popular brothers of Kollywood Venkat Prabhu and Premji Amaren have crooned a number for the flick. The cinematography department of the venture has been handled by Martin Joe while the editing department of the project has been dealt by K. J. Venkat Ramanan. The motion picture is bankrolled by P. S. Raghunathan under the banner Two Movie Buffs partnering with Chandrasekar. R.

On the work front, actor Parthiepan is gearing up for a back to back release in the likes of his experimental project Otha Seruppu Size 7 and his comedy entertainer Thittam Poattu Thirudura Kootam. On the other hand, actor Chandran is currently busy shooting for his next project titled as Naan Seidha Kurumbu and also for Daavu. Apart from these films, the actor is waiting for the release of his next movie Graghanam directed by Elan and also for the multi starrer film Party which is directed by Venkat Prabhu.