Actor Yogi Babu is the current comedy sensation of Tamil cinema with directors and producers waiting at his door step to rope him in to their projects. The actor is having the time of his life as a comedian as well as, as a lead hero. Though his first venture as a full-fledged hero Dharmaprabhu put on a flop show in theaters, the actor has got his next flick as a lead hero Gurkha directed by Sam Anton hitting the screens today and he is said to be in full hopes that this entertainer will propel him in to the image of a bankable lead hero of Tamil cinema. 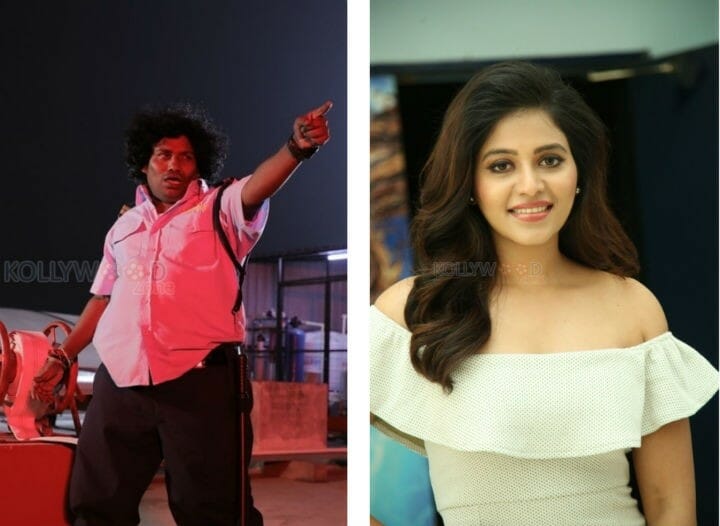 Now, we have an interesting update on the actor’s next venture. We all know that the actor romanced lady super star Nayanthara in the dark comedy drama Kolamavu Kokila. Now we have reports stating that the Dharmaprabhu hero will be romancing actress Anjali in his next movie. This news has given room for little envy among young heroes in Kollywood on Yogi Babu as the actor who turned heads by romancing Nayanthara will now be getting all the attention by romancing Anjali. We had reported earlier that Yogi Babu will be teaming up with the small screen super star Ramar for a project, as reported this venture will have both the actors sharing the screen space. The film is scripted and directed by film maker Krishnan Jayaraj who had previously directed the Mirchi Siva starrer Sonna Puriyaathu. Actress Anjali is said to be seen in the role of a Basket Ball player in the comedy entertainer.

The movie is still in its initial stage, the cast and crew that will be part of the film will be announced soon. The production unit is said to have plans to bring the flick on floors as soon as possible. The musical instruments for the drama will be handled by Vishal Chandrasekhar. The motion picture is set to be funded by Sinish Sreedharan who had previously directed the thriller movie titled Balloon starring rumored to be love birds Jai and Anjali. Sure, the actor indeed is having the best time of his lifetime. We wish him the very best to keep entertaining the audience for a long time as now.

On the work front, actor Yogi Babu is the busiest comedian in Tamil cinema currently with more than twenty plus flicks in his kitty. You heard that right; the Mr. Local comedian has got twenty plus flicks in his bag for real. The actor, who will be having a release today in the likes of Gurkha, has the horror comedy titled as Zombie in his pipeline waiting for release. The comedian is currently busy shooting for the super star Rajinikanth starrer Darbar under the directorial of controversial director A. R. Murugadoss and the Vijay starrer Bigil directed by Atlee. Apart from this project he has recently teamed up with former comedian Santhanam for Dagalty. Besides these projects, the actor has 100 % Kadhal, Shaitan ka Bachcha, Panni Kutty, Asura Guru, Nindru Kolvaan and many more projects in his kitty.