It is a season of women centric films in Kollywood with leading ladies in the industry showing keen interest to do women centric films rather than being a showpiece in a leading hero’s film. The trend which was set by lady super star Nayanthara is now been followed by many leading ladies of Tamil cinema. Well, heroines attempting to establish themselves as sole bankable artist, is surely a good sign for Tamil cinema. In that list the ever green South Indian beauty Trisha Krishnan is a major player who is working hard to create a market for herself. Though her initial attempts through Nayagi and Mohini did not bear fruit, the actress is still in the run. 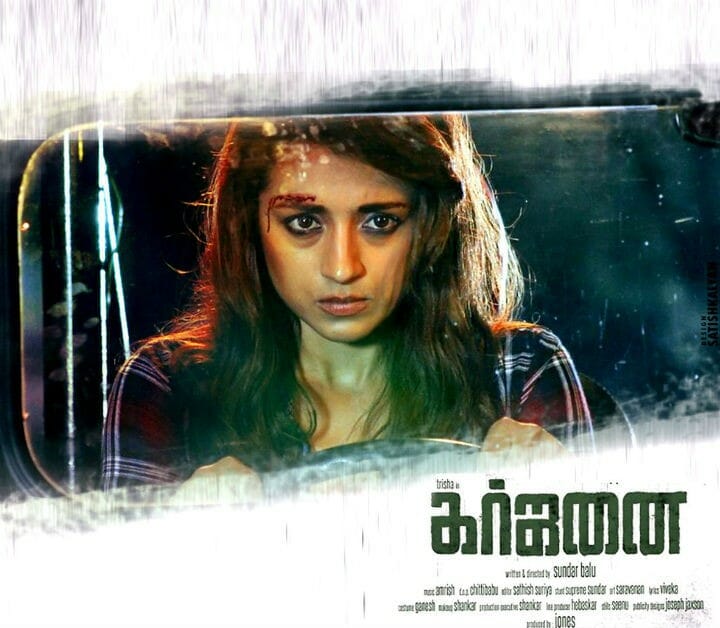 Now, the film which went on floors in the year 2017 titled as Garjanai said to be the remake of super hit Bollywood film NH10 starring Anushka Sharma in the lead role, is finally gearing up to hit the screens soon. The flick is directed by debutant film maker Sundar Balu. The director has recently opened up about the project and is full of praises for the actress. Speaking about the actress the director states, “The film has some high octane stunt sequences and Trisha showed a lot of interest to do them on her own without a body double. In fact, the opening scene will have her involved in a fight sequence where she has to throw herself on a glass pane and she did it on her own. There are many such high octane action blocks in the flick which are well choreographed and we have ensured to not over do them. The character gets embroiled in some sort of trouble and must use her brains to come out it. Trisha was apt for the role and she has delivered an amazing performance in the movie.”

The song of praise did not end there, continuing to speak the film maker said, “We shot the whole movie during the night time. We traveled to Kodaikanal to shoot the film. It had rained heavily the before day and the place of full of leeches. We could not postpone the shoot, understanding the situation Trisha was ready to shoot without any complain or cringe. She got hurt badly a couple of times while on shoot but she never reacted one bit and was keen to finish the shoot on time.”

Finally the story teller did speak about his project, the director said, “The film is a chain of events that happens in one night. Trisha plays Madhu in the drama, a western dancer who visits Kodaikanal with her boyfriend played by Amit Bhargav. In the tourist destination Madhu gets dragged in to trouble. How she gets out of the situation she is caught in, is what makes the story. The story will also be quite apt for any mass action hero. But things are changing and we are able to witness at least one women centric film hitting the screens in a month. So now it does not matter whether it is a hero or heroine subject. People are just expecting fresh and quality content. I am sure this will stand up to their expectations,” concluded the director.