Actor Vimal has had a tough run for the past few years. None of his projects hit the theaters as planned and the actor was literally away from the industry during this phase. But he has somehow figured things out and has found his hope in his last released web drama Vilangu helmed by filmmaker Prasanth Pandiyaraj with actress Ineya in the female lead role. The web drama enjoyed a good reception among the digital audience. Now, with the hope instilled by the series the actor is working hard for his upcoming flick christened Thudikkum Karangal. Director Veludoss Gnanasamantham is helming the drama. The project went on floors with a small pooja ceremony earlier this year. The shooting for the venture is underway in full fledged. 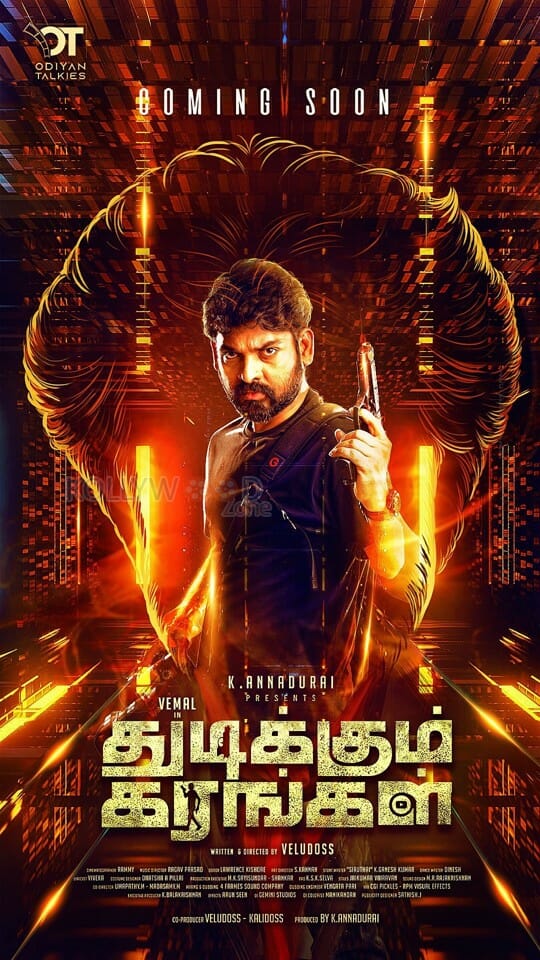 In the first look poster, actor Vimal is seen donning a black t-shirt and is seen holding a gun with an intense look on his face. It is said that the production house is in plans to wrap the shoot of the entertainer in a couple of months. The production unit aims to bring the film out by the end of this year. There is an old film of superstar Rajinikanth with the same title. There are no details regarding whether this film has any connection to the old one. But the background outline image in the poster sort of appears like actor Rajinikanth’s image. Further details regarding the project are expected to be made soon. In the latest blockbuster Vikram, Lokesh Kanagaraj used the old film effectively. It would be interesting to see if Thudikkum Karangal has any such play.

Apart from actor Vimal, the film has actress Misha Narang in the female lead role. The casting department of the drama has actors Sathish, Sneha Gupta, and Suresh Chandra Menon, essaying various other supporting roles. Music director Ragav Prasad will be scoring the music for the flick. The cinematography department will be taken care of by cinematographer Rammy. The drama will be edited by editor Lawrence Kishore. The movie is funded by K. Annadurai Sekutty for the banner house Odiyan Talkies.

On the work front, actor Vimal who had his last outing in the web series Vilangu is currently busy shooting for multiple projects simultaneously. He is shooting for the venture named Deiva Machan helmed by story teller Martyn Nirmal kumar Enga in which he will be romancing actress Neha Jha, Pattan Sothu filmed by director A. Sarkunam in which he will be sharing the screen space with actress Anicka Vikhraman, for Manjal Kudai under the directorial of film maker Sivam Rajamani in which he will be seen alongside actress Shirin Kanchwala, and for Kulasami scripted by Saravana Sakthi in which he will be romancing actress Tanya Hope. Completing these flicks, the actor will begin shooting for Thudikarangal directed by Veera and Lucky. Apart from these ventures, the actor has his long-delayed movie titled Sandakkari filmed by R. Madhesh awaiting release.