Actress Aishwarya Rajesh who ventured into Tamil cinema back in the year 2010 with Neethana Avan garnered the attention of the audience with her impressive performance in the social drama Kaaka Muttai helmed by director Manikandan. Her performance in the film received critical acclamations from both the critics and audience alike. The success of the movie turned her into one of the busiest actresses of South India. The Vada Chennai actress is currently shooting for her upcoming drama titled Driver Jamuna. The project is helmed by film maker P. Kinslin of Vathikuchi fame. Now, the production unit has unveiled the first look poster of the flick on social media. 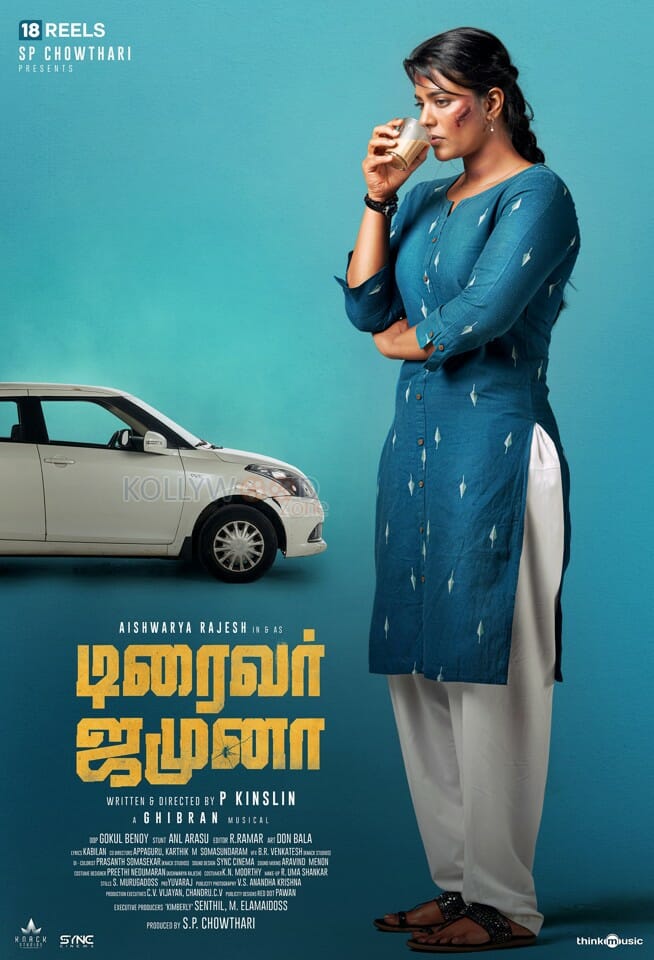 In the poster the actress is seen sipping her tea/coffee, seriously contemplating something. There is presumably a Maruthi Suzuki swift dzire in the background. Apparently, actress Aishwarya Rajesh will be playing the role of a cab driver in the crime thriller. Talking to a leading media house about the project, director P. Kinslin stated, “The venture will depict a series of events that transpire in one day, and how that impacts the life of a woman cab driver. Actress Aishwarya Rajesh has given her best. As part of preparation for the role, she interacted with a bunch of real-life women cab drivers to get to know their gestures and learn from their experience.” Speaking about the performance of the actress, the filmmaker said, “There were portions where she had to perform while she was driving the car. She managed to focus on driving without compromising on her performance. We had a couple of chasing sequences. We shot them live on the road. Without opting for a dupe, Aishwarya Rajesh did it herself. She stunned our stunt master Anal Arasu and the people on the sets.”

Apart from actress Aishwarya Rajesh, the casting department of the drama has actors Aadukalam Naren, Sri Ranjani, Kavitha Bharathi, Pandi, Abhishek Kumar, and Manikandan essaying various other supporting roles. Musician Ghibran will be composing the music for the entertainer. The cinematography department has been handed over to cinematographer Gokul Benoy. Editor R. Ramar will be trimming the movie. The entertainer is bankrolled by S. P. Choudhary for the banner house 18 Reels.