Actor Dhanush is fresh from the success of his Hollywood movie The Gray Man helmed by story tellers Christopher Markus and Joe Russo in which he had shared the screen space with actors Ryan Gosling, Chris Evans, and Ana De Armas. The flick was released on the Netflix OTT platform last week and since then has been clocking up views. After his short ride in the world cinema the Kaadhal Kondein actor has returned to Tamil cinema. The actor is currently busy shooting for his next Tamil Telugu bilingual drama christened Vaathi. The action flick is written and directed by story teller Venky Atluri. Actress Samyuktha Menon of Kalari fame will be seen in the female lead part. The project which went on floors at the beginning of this year has reached its final leg of shooting. The production unit is in plans to finish the project as quickly as possible and take it to the post production as they eye to bring the venture to the theaters by the end of this year. 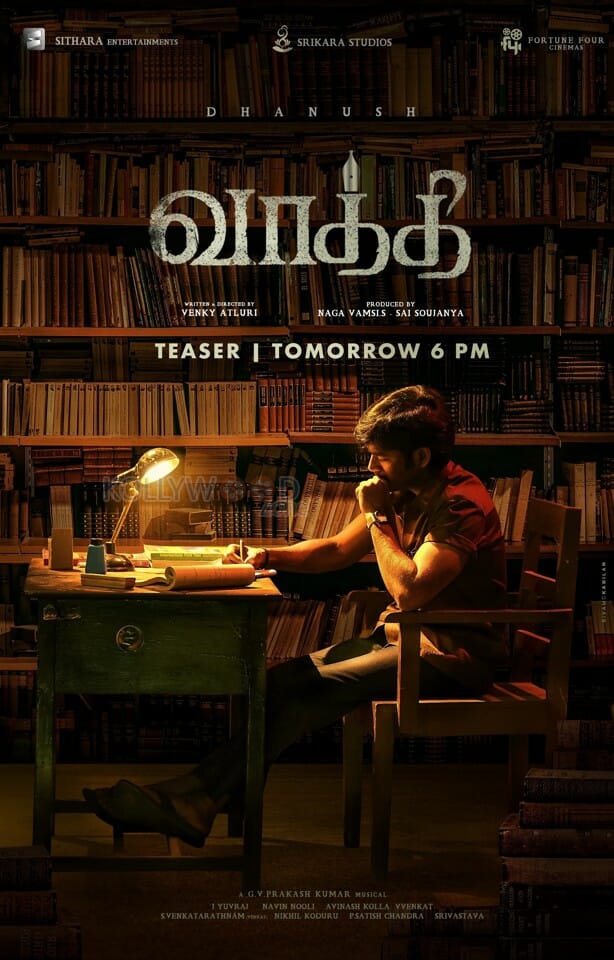 In the first look poster, actor Dhanush is seen in a vintage getup sitting on a desk and penning something seriously under the light of a table lamp. The first look poster is sure to pique the interest of his fans. It is said that the entertainer is set in the backdrop of the 1980’s where he plays the role of a teacher. Apart from actors Dhanush and Samyuktha Menon, the casting department of the entertainer has actors P. Sai Kumar and Tanikella Bharani essaying vital supporting roles. The music for the entertainer is composed by musician G. V. Prakash Kumar. Vaathi marks the sixth time association of the musician and actor duo. Cinematographer J Yuvaraj will be seen behind the camera for the movie. The editing department of the flick has been handed over to editor Naveen Nooli. The project is produced by Suryadevara Naga Vamsi for the banner house Sithara Entertainments along with Sai Soujanya for the production house Fortune Four Cinemas.

On the work front, actor Dhanush who was last seen on screens in a supporting role in the Hollywood entertainer The Gray Man is gearing up for the release of his next romantic comedy film christened Thiruchitrambalam directed by Mithran Jawahar in which he has romanced actresses Priya Bhavani Shankar, Raashi Khanna, and Nithya Menon. The project is poised to hit the screens on 18th of August this year. The actor will soon begin shooting for his upcoming drama Captain Miller which is set to be helmed by film maker Arun Matheswaran, and for a movie tentatively titled D 46 under the directorial of Sekhar Kammula. Apart from these projects, the actor has Naane Varuven directed by Selva Selvaraghavan in the post production getting tuned for release.

Chennai Palani Mars director opens up on the...

Arun Vijay’s Borrder To Hit The Theaters On...