Dual hero films always become a talking material. Recent example of that is actor Kamal Hassan’s Vikram which had superstars Vijay Sethupathi, Fahad Fasil, and Suriya in a guest appearance. Slightly different in stardom, actors Yogi Babu and Karunakaran’s Panni Kutty is on the line for release. Both the actors have teamed up together for the first time to play the lead roles. The trailer of the flick was recently launched by the production house which has clocked millions of views so far. Now, we have info regarding the release date of the flick. The production house themselves has announced the news on social media. Panni Kutty is all set to hit the screens on 8th of July this year. Taking to their official twitter account, the banner house shared a poster from the film and wrote, “She’s coming to meet you all. Panni Kutty releasing at screens near you on July 8th.” 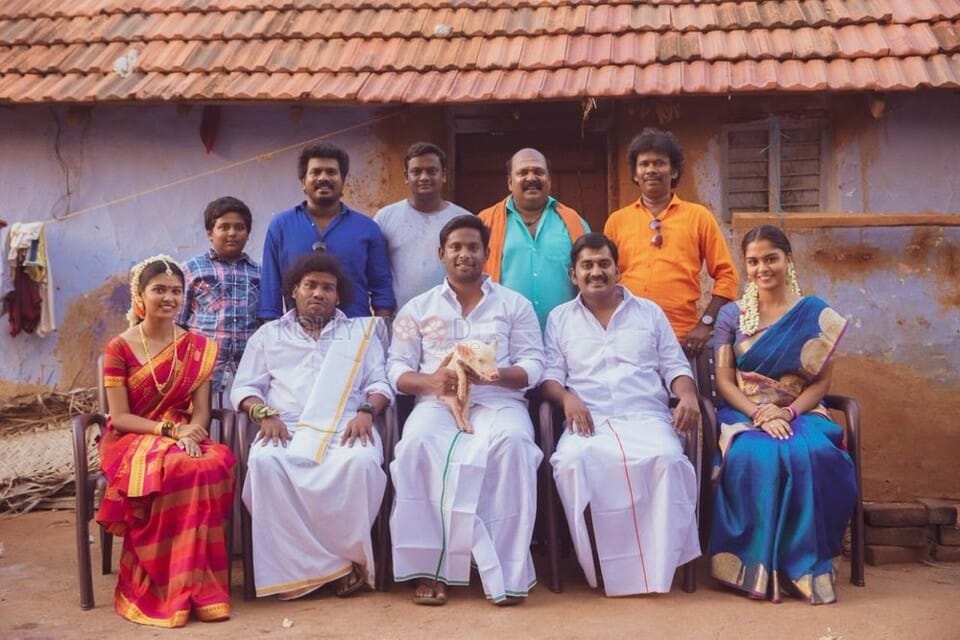 Panni Kutty as the title suggests is entirely based on a pig and the turmoil that actors Yogi Babu and Karunakaran go through in their efforts to get hold of it. Apart from actors Yogi Babu, and Karunakaran, the casting department of the venture has actors Dindigul Leoni, KPY Ramar, KPY Tiger Thangadurai, and Singampuli playing various other supporting roles. Music director K. Krishna Kumar of Aandavan Kattalai fame will be composing the music for the flick. The camera work for the drama has been handed over to cinematographer Sathish Murugan. Editor Kannadasan DKD will be trimming the movie. The project is funded by Sameer Bharat Ram under the production house Super Talkies.

On the work front, actor Yogi Babu who was last seen on screens in Veetla Vishesham is gearing up for the release of his next venture christened Yaanai helmed by storyteller Hari in which he has played the sidekick of actor Arun Vijay. The flick is poised to hit the theaters on 1st of July this year. The actor is currently busy shooting for actor Vijay’s upcoming flick tentatively titled as Thalapathy 66 under the direction of story teller Vamshi Paidipally, and for the sequel of Thalai Nagaram under the direction of story teller V. Z. Dhorai with actor Sundar C in the lead. Apart from these dramas, the actor has Naane Varuven directed by storyteller Selvaraghavan in which he has shared the screen space with actor Dhanush, Ayalaan filmed by storyteller R. Ravikumar in which he has co starred with actor Sivakarthikeyan, and Takkar scripted by film maker Karthik G in which he will be seen alongside actor Siddharth in the post production shaping up for release. The Gurkha actor also has a bunch of delayed ventures in his pipeline awaiting release.

On the other hand, actor Karunakaran who had a last outing in Payanigal Gavanikkavum is getting ready for a consecutive release in the likes of Unarvugal Thodarkathai scripted by filmmaker Balu Sharma, Maha filmed by director U. R. Jameel in which will be seen alongside actress Hansika Motwani, Kasethan Kadavulada directed by storyteller R. Kannan, Jiivi 2 helmed by director V. J. Gopinath in which he has shared the screen space with actor Vetri, and Ayalaan directed by Ravikumar R in which he has played the sidekick of actor Sivakarthikeyan.