Actor Simbu who was training in London recently returned to the state to attend his brother’s wedding. The actor had lost weight and appeared trim in the wedding. He looked as if he has equipped himself with everything necessary to start his second phase of his career. The actor is currently busy shooting for what would be an extended cameo appearance for his rumored ex girlfriend Hansika Motwani’s Maha. After wrapping up the project the actor would be joining the sets of director Venkat Prabhu to finally begin shooting for their flick titled Maanaadu. 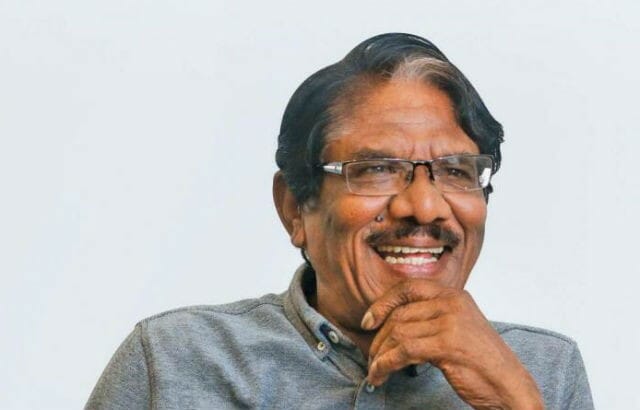 Now we have an updated on the project. According to sources veteran director and actor Bharathiraja is said to have been brought on board by the production unit. There were rumors in the K town stating that the ace director will be playing the baddie in the film against Simbu. But according to a source close to producer, “It is true that veteran director Bharathiraja has been brought on board for the film. But he will not be seen on a negative role instead he will be donning a pivotal role in the film. An official announcement of Bharathiraja being a part of the film will be made soon.” It would be interesting to see who the director has in his mind to play the antagonist role as he is a specialist in crafting his villains.

This is the first time in his career director Venkat Prabhu has chose to go out of his comfort zone and explore a different genre. We will have to wait to see whether he shines or slides in his new attempt. The first look poster of the film had the powerful political statement, ‘Stand for what is right, even it means standing alone.’ The shooting for the film is expected to go on floors from the month of June.

Actor Simbu is said to undergo martial arts training before he starts shooting for the film. Touted to be a political film, the film has actress Kalyani Priyadarshan in the female lead role. The flick is set to be produced by Suresh Kamatchi with Deepan Boopathy under the banner V House Productions. Ace cinematographer P. C. Sreeram will be cranking the camera for the film, while Praveen KL will be trimming the film. The music for the film will be composed by musical magician Yuvan Shankar Raja.

The actor did not have a successful last outing as Vantha Rajavathan Varuvan under the directorial of director Sundar C failed miserably at the box office but is said to be in full hopes about this project.

On the work front, the actor who is currently busy shooting for Maha will soon join the sets of Maanaadu. Apart from these flicks the actor has the remake of super hit Kannada film Mufti in which he will be sharing the screen space with actor Gautham Karthik. The flick will be directed by Narthan.

On the other hand, Director Bharathiraja will next be seen on screens in the Sasi Kumar starrer Kennedy Club.