Of later, the television industry has been acting as a great launch pad for many artists aiming to be a silver screen star one day. The pool of small screen actors doing well in the silver screen is getting larger and larger instilling hope in many young artists. Actor Pugazh of Cook With Comali fame is the latest one to jump in to that pool making it even wider. The comedian was the talk of the town for his expressions and timing in the first two seasons of the show. The popularity that he gained in the show bestowed him with the lottery ticket to get to the feature film ride. Actor Pugazh made his debut in Tamil cinema with his comical role in Sixer which hit the screens with actor Vaibhav as the lead. In a short succession of time, he bagged the opportunities to star with superstar actors Karthi in Kaithi, Ajith in Valimai, and Suriya in Etharkkum Thunindhavan.

Now, the actor is all set to turn lead hero in his next comedy drama christened Mr. Zoo Keeper. The film is the adaptation of the blockbuster Hollywood flick Zookeeper which had actor Kevin James in the lead role. Director J Suresh of Ennavale fame will be helming the drama. Recently the production house dropped the first look poster of the film on social media. The story teller himself took to his official twitter handle and shared the poster of the entertainer and announced that the shooting of the film had begun. Now, he has made a tweet showering praise on actor Pugazh. He wrote that actor Pugazh is a born artist, and he could recognize it as a film maker. He further added, he could handle any sort of character naturally. And finished the note saying, that he is proud to call him his brother. 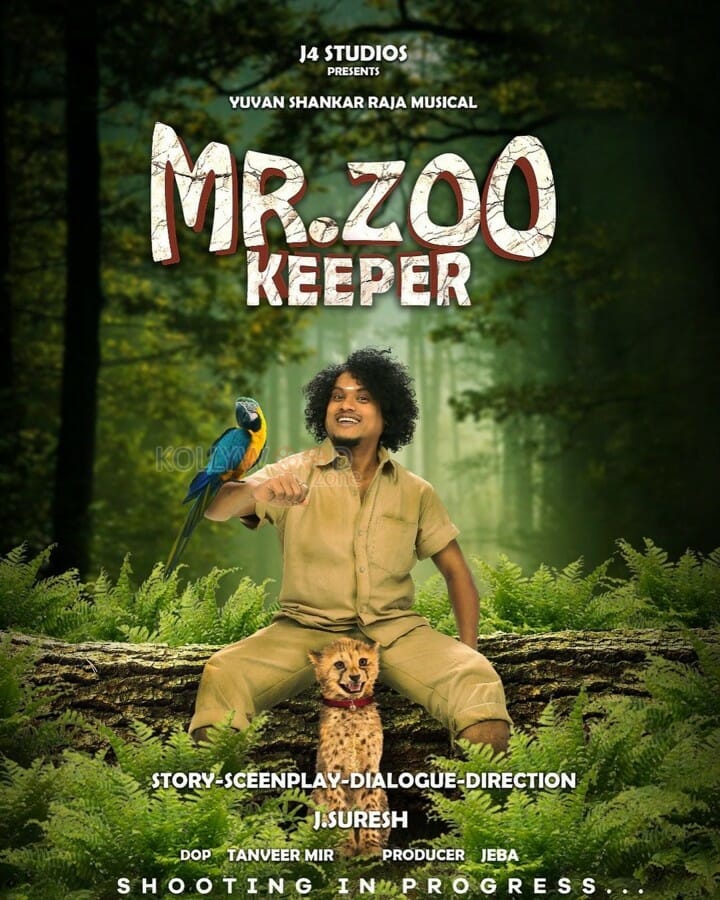 In the first look poster actor Pugazh is seen sitting in a chopped off tree branch with a parrot in the hand and a wild cat to his front. The unit is currently shooing in Ooty for the first schedule of shoot. It is said the team will soon leave for Philippines for the second leg of shoot. The production house is in plans to bring the film to the theaters by the end of this year. Actress Shirin Kanchwala will be romancing actor Pugazh in the film. The music for the drama will be composed by musician Yuvan Shankar Raja. The cinematography department has been handled by cinematographer Tanveer Mir. The film is funded by Jeba under the banner house J4 Studios.

On the work front, actor Pugazh who recently had a release in the Suriya Starrer Etharkkum Thunindhavan is gearing up for the release of his next ventures titled Kasethan Kadavulada directed by R. Kannan in which he will be sharing the screen space with actor Shiva. He is currently busy shooting for his next project Agent Kannayiram under the directorial of film maker Manoj Beedha in which he will play the sidekick of actor Santhanam. Apart from this he has Yaanai helmed by story teller Hari in which he will be seen alongside actor Arun Vijay.

Sasi Kumar gets a new heroine for Naa...

Who is playing villain role in KV. Anand’s...