Dulquer Salmaan who has ruined the sleep of many of his female fans down south with his to die for smile is back again to Tamil cinema with his 25th film. The actor was last seen in Tamil in auteur Mani Ratnam’s O Kadhal Kanmani besides extended cameo appearance in Nadigaiyar Thilagam. Now the actor will next be seen on screens in a direct Tamil flick titled as Kannum Kannum Kollaiyadithaal which is set to hit the theaters under the directorial of debutant film maker Desingh Periyasamy. The project is currently getting shaped up in the post production department. Now, the production unit has unveiled the trailer of the action romance drama on social media. 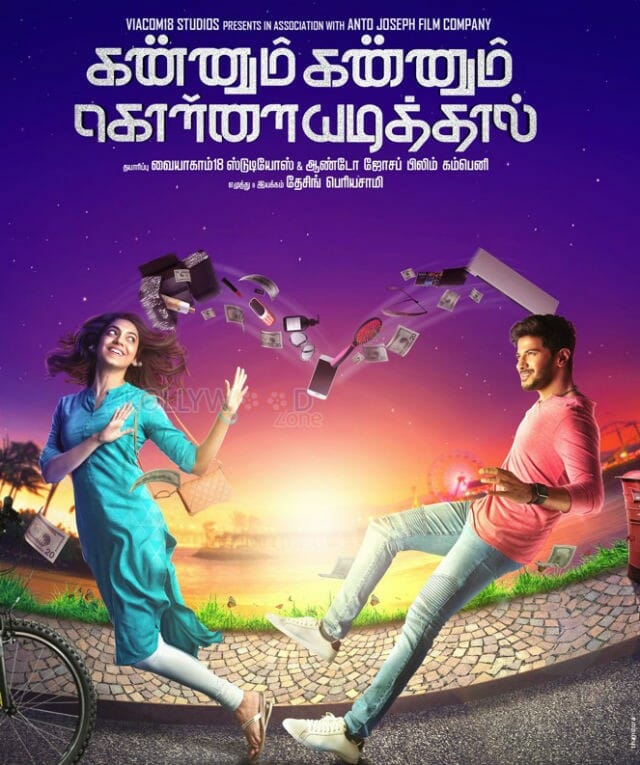 From the trailer we get to know that Dulquer Salmaan essays the role of Sid, a happy go lucky guy who just loves to party with his friend played by VJ Rakshan. The trailer opens with Dulquer mouthing, ‘We have been to many parties but it is now time to celebrate life as a party. He then meets Meera played by Ritu Varma and love brews between them right from the start. The first half of the one and a half minutes cut is occupied with breezy romance scenes and cute love moments. But right after Gautham Vasudev Menon surprise entry things take a different turn. From the trailer Gautham Vasudev Menon seems to be playing the antagonist role of a man who does not waver to kill. This twist adds an inquisitive layer to the film which is sure to garner the attention of movie buffs in the state.

Speaking about the entertainer, the actor said, “Kannum Kannum Kollaiyadithaal is an interesting love story. I am really glad that I was part of this project with such a talented and fantastic cast and crew. This flick will also mark my 25th project so this makes it even more special for me. I hope the audience will also enjoy the drama and feel the love with which it has been made.”

The trailer promises to be a perfect blend of action and romance as we get to see Dulquer in a romantic tone as well as, as an action hero. This seems like an ideal project for an actor’s 25th film and the trailer of the venture is certain to create a lot of expectations among the audience. Apart from Dulquer Salmaan, Ritu Varma and Gautham Vasudev Menon, the casting of the entertainer has Rakshan and Niranjani Ahathian essaying pivotal roles. The musical instrument for the drama has been handled by Masala Coffee band. While cinematographer K. M. Bhaskaran has cranked the camera for the movie, Praveen Anthony will be trimming the entertainer. The motion picture is bankrolled by Anto Joseph under the banner Anto Joseph Film Company partnering with Viacom 18 Motion Pictures.

On the professional front, the actor who is gearing up for the release of Kannum Kannum Kollaiyadithaal is busy shooting for another Tamil film titled as Vaan which will be directed by R. A. Karthik in which he will be sharing the screen space with Priya Bhavani Shankar and Kalyani Priyadarshan. The actor also has a Hindi flick named as The Zoya Factor under the directorial of Abhishek Sharma.