Leading ladies of Tamil cinema focusing on doing women centric films is the current trend of Kollywood. The path carved by lady super star Nayantara is walked up on by many heroines in the industry. The recent one to take the path is none other than our evergreen pretty actress Trisha Krishnan. The actress was last seen on screens in the block buster romantic film 96 starring Vijay Sethupathi which was celebrated by all sector of audience and was critically acclaimed by the critics in the industry for the feel good experience that the love drama inflicted on people. 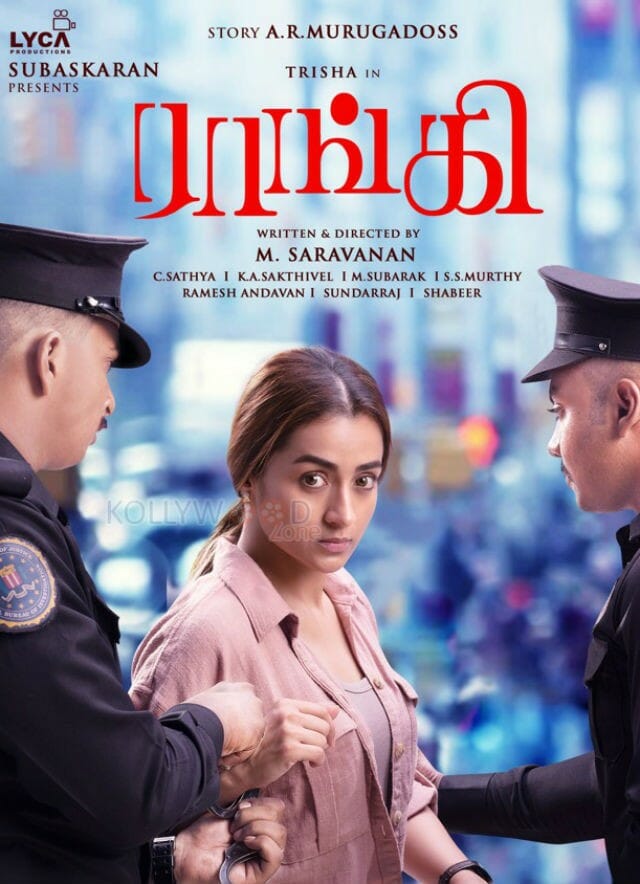 After the success of the film the actress began shooting for her next project Raangi under the directorial of Engeyum Eppodhum fame director Saravanan. Touted to be an action thriller film, the flick has actress Trisha in the lead role. Recently the first look of the film was unveiled on the internet by the Lyca Production house. In the poster the actress is seen getting locked up by the cops on a foreign soil, while she puts on a fierce look that tries to indicate that she will pay back to the ones who have put her in that situation.

The story for the film was penned down by controversial director A. R. Murugadoss for his former associate Saravanan. This comes as a gift of recovery from the director for his associate, as Saravanan was fatally wounded in a car accident just like the one he had filmed for his flick Engeyum Eppodhum. The shooting for the film is half way done and is expected to be wrapped up in the month of June. Actress Trisha, who has already done some women centric films like Naagi, is yet to prove her market with a solid women centric film. But the actress is quite confident that Raangi would be a game changer for her.

The musical instruments for the film will be handled by C Sathya. While K. A. Sakthivel will be cranking the camera for the film, editor M Subarak will be responsible for trimming the film. The film is expected to hit the screens in the month of September.

On the work front, the actress is simultaneously shooting for Raangi as well as for her yet to titled action flick under the dirctorial of Sumanth Radhakrishnan, in which the actress will be sharing the screen space with veteran actress Simran. Apart from this flick the actress also has Paramapadham Vilayattu and Garjanai lining up to be released back to back. There are also reports that the actress will be donning the role of actress Taapsee Pannu in the remake of super hit Bollywood film Badla.