Generally, remaking a hit entertainer requires additional care but when the content is both sensitive and has enjoyed a good reception among the audience, it must be dealt with diligence as it is necessary to retain the essence of the flick despite the adjustments made in respect to the sentiments of the audience for whom it is made. It is on this complex thread on which director Krishna Marimuthu had to develop the script. With giving too much significance to the audience’s sentiments the story teller has diluted the essence and purpose of the flick.

We are at the time where Tamil cinema audience have begun to grow tired of the done to death formulaic template dramas and are craving for fresh content. That indeed has given many young story tellers the confidence to make films on different and sensitive topics. And that is the reason why debutant film maker Krishna Marimuthu has opted to deal with a sensitive topic in his very first flick and has also succeeded in his attempt to an extent. After the jaded romantic comedy flick Dhanusu Raasi Neyargale actor Harish Kalyan is back on screens with the remake of blockbuster Hindi film Vicky Donor. 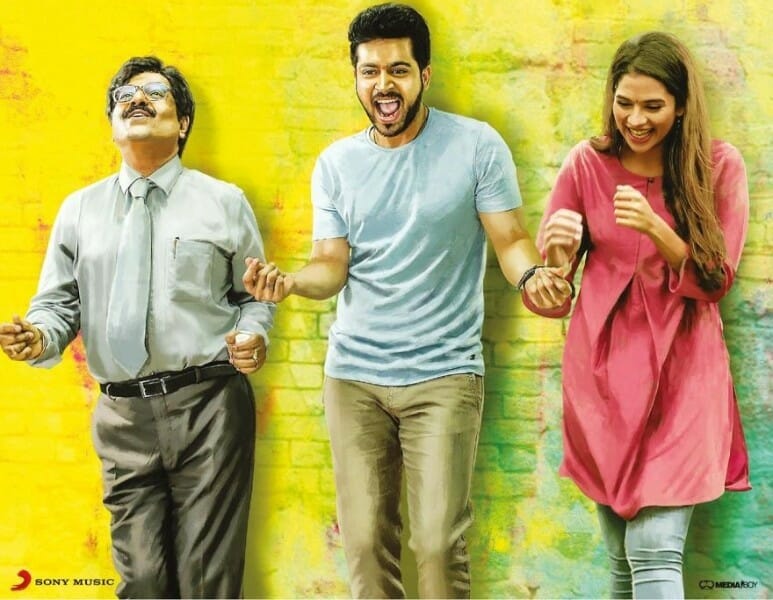 Prabhu Govind (Harish Kalyan) is a well disciplined footballer who plays 5s format football games in order to secure a job through sports quota. He leads a carefree life with his mother and grandmother taking care of the financial needs. They run a beauty parlor at the heart of the city. Life goes on smoothly for Prabhu until he falls in the site of fertility doctor Kannadasan (Vivek), who runs a fertility centre and a sperm bank in Chennai. Though Kannadasan has been offering solutions to couples for nearly two decades, of late, Kannadasan’s centre has seen many rich infertile clients walk in. But the problem is the couples have high expectations regarding the genes that they want to use for artificial insemination. This puts doctor Kannadasan in the hunt for a potential sperm donor who could fit in the expectations of his clients.

This is when Kannadasan meets Prabhu whom he considers as a fitting donor as he is young, handsome, and leads a healthy lifestyle with no alcohol consumption and follows a vegan diet. So Kannadasan approaches Prabhu to make him his donor. But Prabhu refuses to strike a deal with him and begins to get away from him. Kannadasan offers different propositions to Prabhu only to see them turned down by the latter. However, an emotional incident in Prabhu’s life makes him understand the emotions and the desperate desire of childless couples to have a kid. So he agrees to be a sperm donor and becomes a regular donor in Kannadasan’s centre without his family having any idea about it. Kannadasan begins to see a hike in business and in return Prabhu makes a good amount of money as well.

Everything moves smoothly but things get complicated when Prabhu meets Nidhi Mandanna (Tanya Hope) and falls in love with her. Feeling shy to tell Nidhi about what he does for survival Prabhu decides to quit his sperm donation and find something else for a living. But in no time both their families meet and the couple get married immediately which puts more pressure on Prabhu. His frequent sperm donation begins to jeopardize his relationship with his wife. When she finds out that she cannot conceive, things take a different turn. Will Prabhu reveal what he does for a living to his wife and family, if so how will they deal with it, is what makes the rest of the flick.

Generally, remaking a hit entertainer requires additional care but when the content is both sensitive and has enjoyed a good reception among the audience, it must be dealt with diligence as it is necessary to retain the essence of the flick despite the adjustments made in respect to the sentiments of the audience for whom it is made. It is on this complex thread on which director Krishna Marimuthu had to develop the script. With giving too much significance to the audience’s sentiments the story teller has diluted the essence and purpose of the flick. The purpose of Ayushmann Khurrana starrer Vicky Donor was to make the concept of artificial insemination quite a normal process in the society. But here that purpose itself is done in a secretive way.

Apart from that, the story teller has used the scope of the topic and has made the most out of it in terms of the comical aspect of the flick which speeds off the first half of the entertainer. Comical portions between actor Harish Kalyan and Vivek are genuinely enjoyable. Also, negating dramatic elements and allowing the flick to proceed in a natural way adds strength to the flick. The casting director deserves credit for bringing on board an equally befitting cast to that of the original version of the flick.

Actor Harish Kalyan has pulled of his role of an innocent next door boy with ease. Actress Tanya Hope is adequate. While veteran actor Vivek scores big in the drama, veteran actress Sachu makes her presence felt in a very short screen time. The rest of the cast has delivered a decent performance.

On the technical front, despite a cluster of musicians in the panel the numbers and background scores does not impress much. Cinematographer Selva Kumar’s frames are good which is further uplifted by editor Kripakaran’s editing.

On the whole, Dharala Prabhu is a decent comical drama which could have been an impactful film if it had stayed true to its original version.

Arun Vijay’s next to be bankrolled by his...