Actor Suriya is gearing up for the release of his much anticipated film of the year Kaappaan under the directorial of K. V. Anand of Iyan fame. The actor’s previous venture NGK directed by Selvaraghavan which hit the screens amidst high expectations did not set the box office cash registers ringing. The fans of the actor have been waiting for a long time now to see their favorite star in a mega block buster movie. Suriya’s last super hit block buster film was 24 back in the year 2016. Since then the star has delivered back to back failure movies. It has been more than 3 years now and the actor has not delivered a solid hit yet. The Pithamagan star is said to have high hopes on Kaappaan and is confident that the action entertainer will bring him back to the profitable zone. 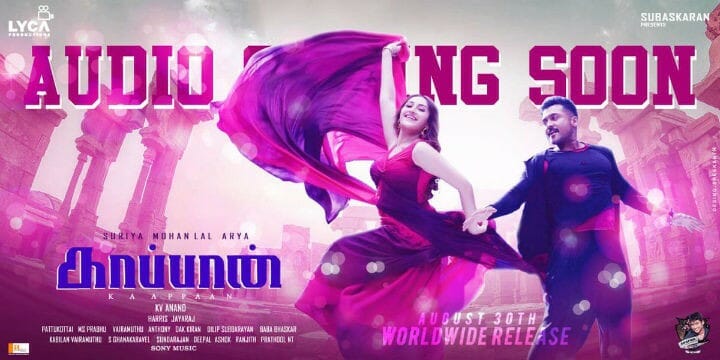 The actor is currently busy shooting for his next project Soorarai Pottru under the directorial of story teller Sudha Kongara of Irruthi Sutru fame. Now, we have a spine chilling news for the fans of the actor. We have reports that the audio launch of the venture is set to take place in a grand mode on 21st of this month. According to a source close to the production unit, “The production house is planning to hold the audio launch function of the flick on July 21st. The unit is planning to make this audio launch in to a grand event which is set to be held at Sri Ramachandra Convention centre in Thiruvanmiyur, Chennai. The audio launch will be covered by the Sun television network. An official announcement regarding the event will be made soon.”

Well, this sure is a happy news for the fans of the actor who gathered in hundreds at Rohini theater to just catch the trailer of the venture on big screens. Actor Suriya plays a NSG Commando officer in the flick who dons different getup for his undercover missions. The teaser of the drama had the actor performing some bizarre stunt sequences promising to be high on action. According to reports, Malayalam veteran actor Mohanlal will be seen in the role of India’s Prime Minister while actor Arya will be playing the role of Mohanlal’s son.

Besides Suriya, Mohanlal and Arya, the casting of the entertainer has Sayyeshaa in the female lead role, while Samuthirakani, Poorna, Prem, Thalaivasal Vijay, and Chirag Jani will be portraying various other roles. Bollywood veteran actor Boman Irani will play the antagonist role in the film. The music for the flick is composed by Harris Jayaraj. While M. S. Prabhu and Abinandan Ramanujam have cranked the camera for the venture, Antony will be trimming the action drama. The motion picture is bankrolled by Lyca productions and is expected to hit the screens on 10th of August 2019.

On the work front, the actor who is currently shooting for Soorarai Pottru will next join story teller Siruthai Siva for his 39th movie.