Interest for making use of the online content platforms is slowly picking up in film makers of Tamil cinema. We have already had multiple anthology flicks in a short succession. Now, it is time for web series to gain precedence. Irai paves the way for it. The series is based on the crime novel penned by author Archana Sarat. Actor Sarath Kumar who was last seen in Vaanam Kottatum is back on small screens with his debut web series Irai. Director Rajesh M. Selva of Kadaram Kondam fame has helmed the project. So, how has the series come out? Will it be a successful venture for director Rajesh M. Selva and actor Sarath Kumar? To know that let us get in to the series review. 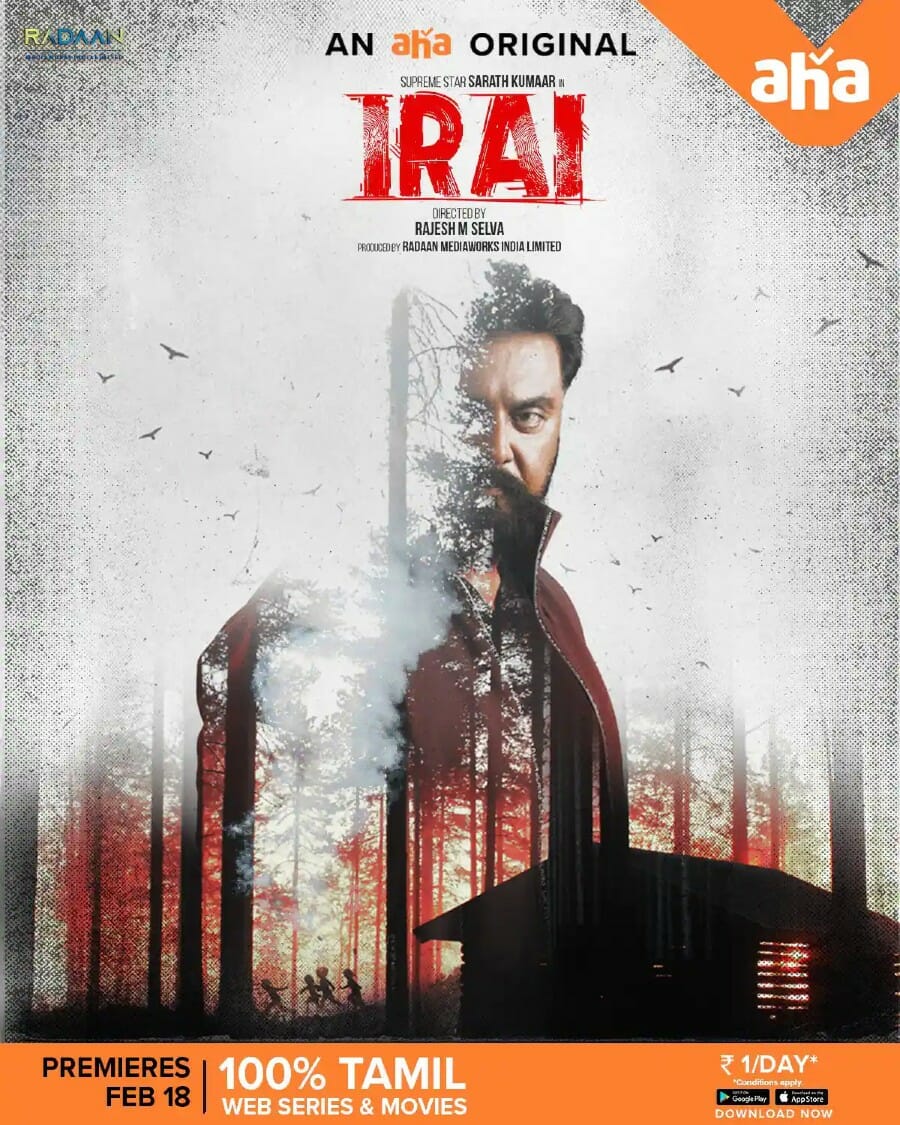 The series depicts the events that transpires in Kodaikanal over nearly half a century with two simultaneous narrations. Irai open in the 1980’s, where we see Ashok Kumar (Sri Krishna Dayal), a coldblooded evil character that heads a criminal gang that is involved in child prostitution ring. He is apprehended at a point. But he uses his political influence, and gets a free pass. He continues his transgression with even more brutality. Then we are introduced to the second plot line, in which the police officials are investigating the case of a minister named Shiva Kumar (Abishek Shankar), who goes missing. Robert Vasudevan (Sarath Kumar), a former cop is roped in, to aid the investigation.

Robert Vasudevan is struggling to deal with his own psychological complexities. Part of which is due to the abduction of his sister. He is in medication and his wife Sheeba constantly keeps on reminding him about his condition and asks him to confine himself to office work. When has a cop character heeded to their partner’s qualms? Robert Vasudevan is not any different. As the film unravels, we come to know that there is a connection between the missing case and the child prostitution racket. The case takes a turn when it is revealed that Ashok Kumar is just an errand boy serving his master. Who is his master, what is the connection between the two cases, and will Robert Vasudevan despite his own inadequacies be able to solve the case, is what makes the rest of the plot.

Director Rajesh M. Selva has picked a decent script to craft a hill station noir. But his writing seems to be a check box style writing of hill station noir. A crime, a detective who sips from his cask, he must deal with his own psychological complexities to stay focus on the case, the inescapable portions of trying to paint him as the know-it-all character, on and on. We keep getting a list of things that are usually associated with this genre of dramas. If we are to list down the things, and keep ticking the check boxes as we watch Irai, we would find that story teller Rajesh M. Selva has got all the boxes ticked. If all the boxes are crossed, then why is Irai not entertaining? Irai concerns itself too much with the way it is presented rather than the content. It aims to get the outlook right but puts no serious efforts to get deep.

Irai does not have anything of substance to be sold as an investigative thriller. Director Rajesh M. Selva indulges in a convenient writing. He makes Robert Vasudevan take the case forward without breaking a sweat. The problematic part of Irai is its good intention is not supported by its writing. The topic that film maker Rajesh M. Selva keeps at the heart of Irai is a sensitive subject. But we do not see him treating it with sensitivity. The child sexual abuse just seems to be a ploy used to swing our emotions. The characterization of the characters is so at the surface level that we cannot help feeling that way. We are just told they are bad guys because they do bad things. Till the end we never really know anything about them let alone their state of mind propelling them to perpetrate such inhumane crime.

Actor Sarath Kumar brings forth his years of experience to portray Robert Vasudevan. He gives life to the part by infusing the police man aura to the character well. Veteran actor Nizhalgal Ravi is effective as usual. Actor Abishek Shankar is adequate. Actor Sri Krishna Dayal does justice to his part. The rest of the cast has delivered what was asked of them.

On the technical front, musician M. Ghibran’s background score adds value to the series. Cinematographer S. Yuva has covered the drama from all possible best angles. He has captured the raw beauty of picturesque locations of the hilly region. Editor San Lokesh complements the work of his colleague with his neat scissor work.

On the whole, Irai could have been a decent hill station noir series but is largely not watchable because of director Rajesh M. Selva’s lethargic piece of writing.