A while ago when the horror genre was the trend in Kollywood, storyteller R. Ajay Gnanamuthu’s DeMonte Colony made its way to the theaters with actor Arulnithi in the lead. The film made a mark for itself among the audience. As a result, racked up a massive collection in the box office. The movie which was made with a budget of 2 crores bagged 25 crores. Nearly after seven years, earlier this year, actor Arulnithi had announced that there will be a sequel for the flick. And that director R. Ajay Gnanamuthu who wrote and directed the first installment will be continuing his job in the second. Actress Priya Bhavani Shankar has been roped in to play the female lead role. 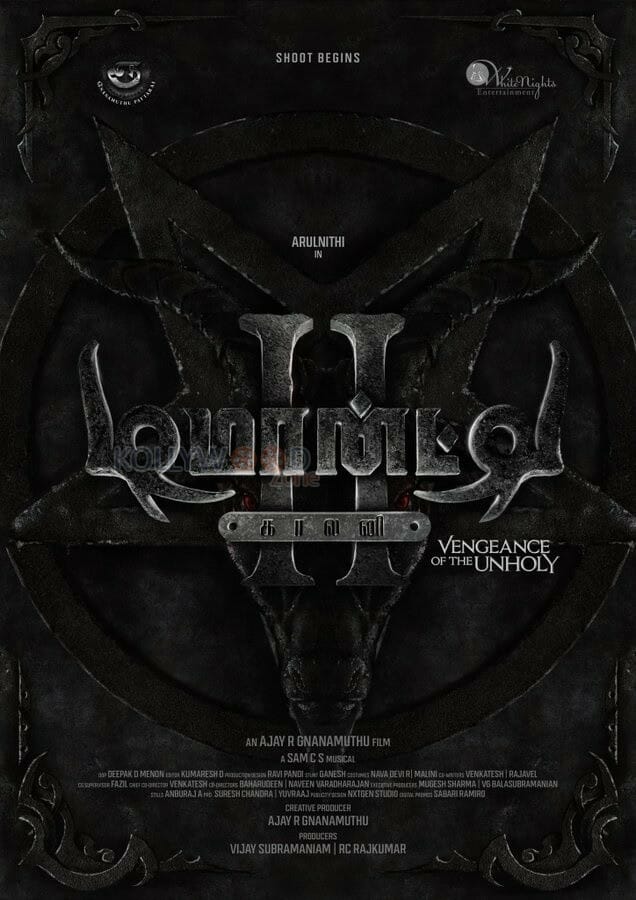 The entertainer went on floors with a small pooja ceremony last month. Now, we have news that the first schedule of the shoot has been wrapped. Talking to a leading media house in the state, director R. Ajay Gnanamuthu expressed his gratitude to his team for their coordination and hard work, which facilitated the wrapping up of the shoot in a short period. The production team which is currently at rest will soon begin to shoot for the second schedule. The tagline of DeMonte Colony 2 ‘Vengeance of the Unholy’ has attracted a lot of attention, and has engineered high expectations on the venture. It looks like there would be no correlation between the first and second parts. As in the first part the lead character played by Arulnithi will be dead in the end. Or will there be a twist in the tale? DeMonte Colony was shot extensively on the colony with the same name which is situated in Alwarpet. Post the release of the drama many youngsters from all around the city began to flock to the place, and the police had to ban the entry of trespassers into the colony.

The first installment of the flick had actors Ramesh Thilak, Sananth, Abishek Joseph, M. S. Bhaskar, and George in various other supporting parts. While it is known that actors Arulnithi and Priya Bhavani Shankar will be seen in the lead roles, details on the rest of the cast are not revealed yet. An announcement regarding the cast is expected to be made soon. In the second edition, music director Sam C S takes the place of composers Keba Jeremiah and S. Chinna. Cinematographer Deepak D Menon has been brought on board for camera man Aravinnd Singh. Editor Kumaresh has been roped in to take the place of editor Bhuvan Srinivasan. Art director Ravi Pandi will be designing the background for the drama. The entertainer is produced by Vijay Subramaniam along with R C Rajkumar under the banner house White Nights Entertainment.

On the work front, actor Arulnithi Tamilarasu who had his last outing in Dairy is currently busy shooting for his upcoming untitled movie under the direction of Gowtham Raj in which he will be collaborating with actress Dushara Vijayan. On the other hand, actress Priya Bhavani Shankar who was last seen on screens in the drama Thiruchitrambalam is currently busy shooting for the sequel of Indian crafted by Shankar in which she will be seen alongside actor Kamal Hassan, for her debut untitled Telugu flick by Eashvar Karthic in which she will be sharing the screen space with actor Satya Dev, and for a Telugu web drama Dootha filmed by Vikram Kumar in which she will be co starring with actors Naga Chaitanya Akkineni, and Parvathy Thiruvothu. Apart from these projects, the actress has Agilan scripted by N Kalyanakrishnan with actor Jayam Ravi in the lead, Bommai crafted by Radha Mohan in which she has romanced actor S J Surya, and Rudhran scripted by S Kathiresan in which she has collaborated with actor Raghava Lawrence in various stages of post-production getting refined for release.

Shoot For Both Parts Of Vetrimaaran’s Viduthalai Is Done!