Atharvaa Murali is that kind of actor who does not scuttle to commit himself to all the projects that come his way. Instead he is a very choosy artist who picks scripts that are quite fresh to the K town. Right from his first film Baana Kaathadi to the last released film Boomerang the actor has donned various challenging roles that are totally different from one another. Specifically, his role as Rasa in director Bala’s film Paradesi earned him a lot of appreciation from the critics as well as the audience. 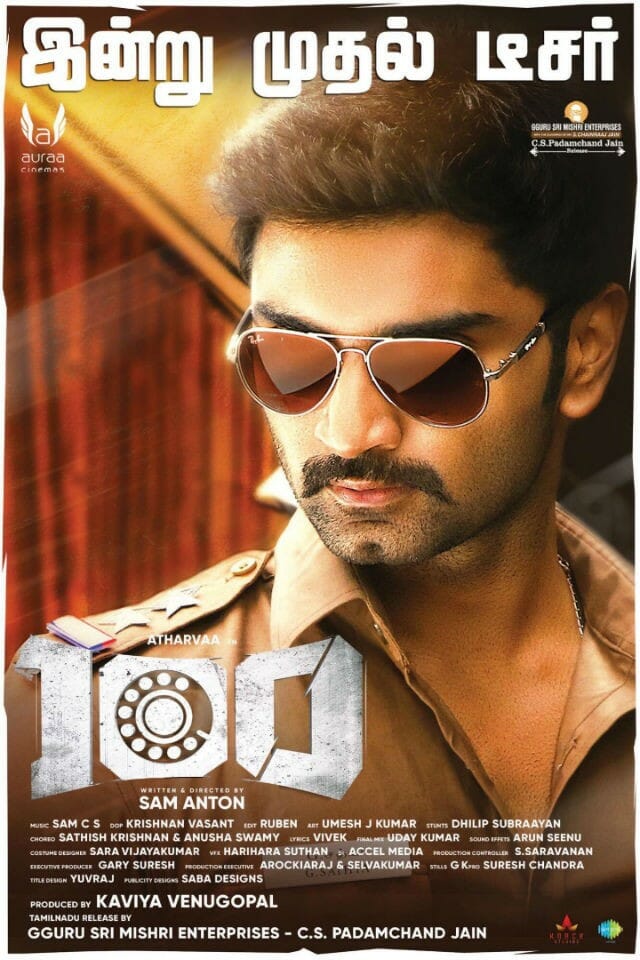 The actor is currently gearing up for the release of his action entertainer flick 100 which is set to hit the screens under the directorial of director Sam Anton. The film was initially planned to hit the screens as a May 3rd release. But now the production house has made an official announcement that the film will be hitting the screens on 9th of May and not on 3rd. The sudden decision of postponement of the film is said to be because of the four flick factor that are about to hit the screens back to back this week.

Devaraattam, under the directorial of Kutty Puli fame director Muthaiah starring Gautham Karthik and Manjima Mohan hit the screens today in the place of Mr. Local which got postponed due to some unknown reasons. As both the flicks are bankrolled by Studio Green production house the production house decided to use the slot booked by Mr. Local to release their other project Devaraattam. K 13 is another venture that will be hitting the screens this weekend. Directed by debutant director Barath Neelakantan the film has Shraddha Srinath and Arulnithi Tamilarasu in the lead roles. Sonia Agarwal starrer Thanimai directed by Sivaraman is also set to hit the screens. Besides this the Malayalam super hit film Lucifer’s Tamil dubbed version starring Mollywood super star Mohanlal which marks the directorial debut of actor and producer Prithviraj is also set to hit the screens.

In order to avoid the clash the production house of 100 is said to have taken the decision of postponing their film for a week. The production house has officially announced the news on their twitter page. The film that is bankrolled by Kaviya Mahesh under the banner Auraa Cinemas has actors Atharvaa and Hansika Motwani in the lead roles while Yogi Babu, Radha Ravi, Mime Gopi, Rahul Dev, Jaangiri Madhumitha, Ramesh Kanna, Akashdeep Sehgal and VTV Ganesh in various other significant roles.

On the work front, the actor is busy shooting for his film Kuruthi Aattam directed by Sri Ganesh in which Priya Bhavani Shankar plays the female lead while actress Radhika Sarathkumar will be seen in a pivotal role. Apart from this the actor has Othaikku Othai which will be directed by Barnesh and it also has actors Sri Divya and Narain.