Hot and beautiful actress Yashikaa Annand who shot to fame after her short stint at Tamil Bigg Boss hosted by universal actor Kamal Hassan was casted as a judge for a dance reality show held on the same channel. Even without delivering a hit film under her name the actress has a huge fan following in the state. The attention that the actress garnered during the show got her a handful of projects. The actress who have wrapped up shooting for almost every film that she had inked her signature for is currently chilling around in her free time. Though the actress is unable to entertainer her fans regularly on big screens, she never fails to entertain them on social media and is very active user of the platform. Now the actress is all over the cinema headlines again. 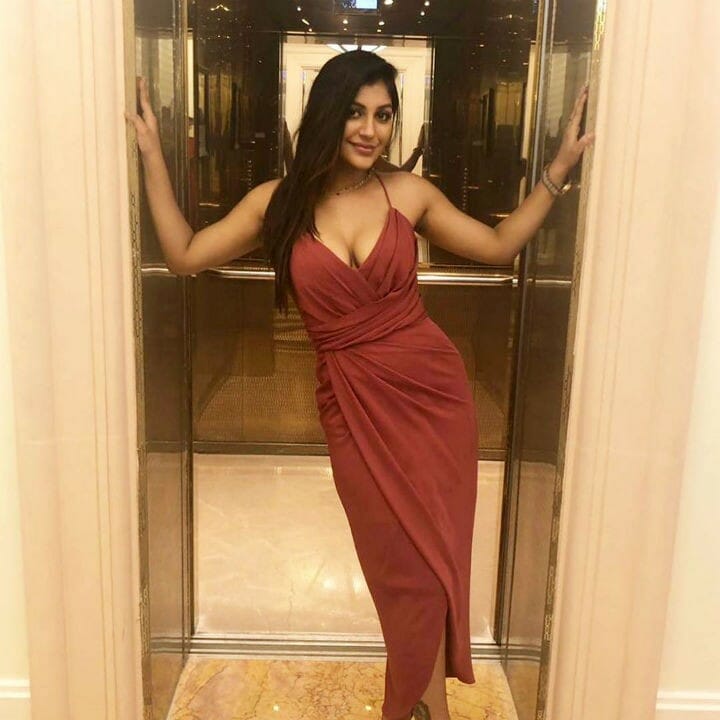 The Iruttu Araiyil Murattu Kuthu star regularly keeps her fans on her social media account entertained by posting some hot photos and videos of herself. The actress in that line has shared a couple of hot photos of herself on her instagram account which has gone viral now. The actress looks smoking hot in the pictures which has raised the temperature of the youths in the state. The actress who celebrated her birthday on 4th of August is in no mood to come out of the celebration yet. Even after almost a month has passed after her birthday the actress has shared a couple of hot snaps on internet and wrote, ‘Post Birthday Celebrations.’ The actress is donning hot red attire with a very declining neckline which is indeed much more than just revealing. The fans of the actress are expressing their love for her by sharing and liking the photos.

As usual the snaps have garnered a lot of attention and people are also expressing their opinions on the hot snaps. While some were very cool with the hot snaps, others were not and have expressed their disappointments over it. However, the fans of the actress came in to give her instant support and have now turned the image viral on social media.

On the professional front, the actress is gearing up for her next horror comedy film Zombie helmed by Bhuvan Nullan in which she will be seen alongside comedian Yogi Babu. The trailer of the flick was recently unveiled by the production unit. Apart from this project the actress has a project with her fellow Bigg Boss contestant Mahat Raghavendra which is titled as Ivan Than Uthaman in her pipeline. She will also be seen in an item number in the film Raja Bheema, which has another Bigg Boss contestant Arav in the lead role. The actress also has Odavum Mudiyathu Oliyavum Mudiyathu in the post production stage.

Aarav is Still the Same Young Boy, But...