Actress Samantha Sets the Internet on Fire with Her Racy Outfit

Actress Samantha Ruth Prabhu is back on news again. Recently, the actress faced a lot of heat for her item number ‘Oo solriya mama’ from Pushpa. The heat has just subsided and the actress has now set the internet on fire again. This time not with any controversy, but with her glamorous photoshoot. The actress who has been on vacation with her girls gang for the past few months, is back on business and has been busy with her sponsored photoshoots. The actress is one of many film celebrities who have a very active media presence. The Neethaane En Ponvasantham star regularly drops photos from her day-to-day life, and from her photoshoots. It is pictures from one such shoot that has become the headlines in the entertainment column of almost all major media houses. 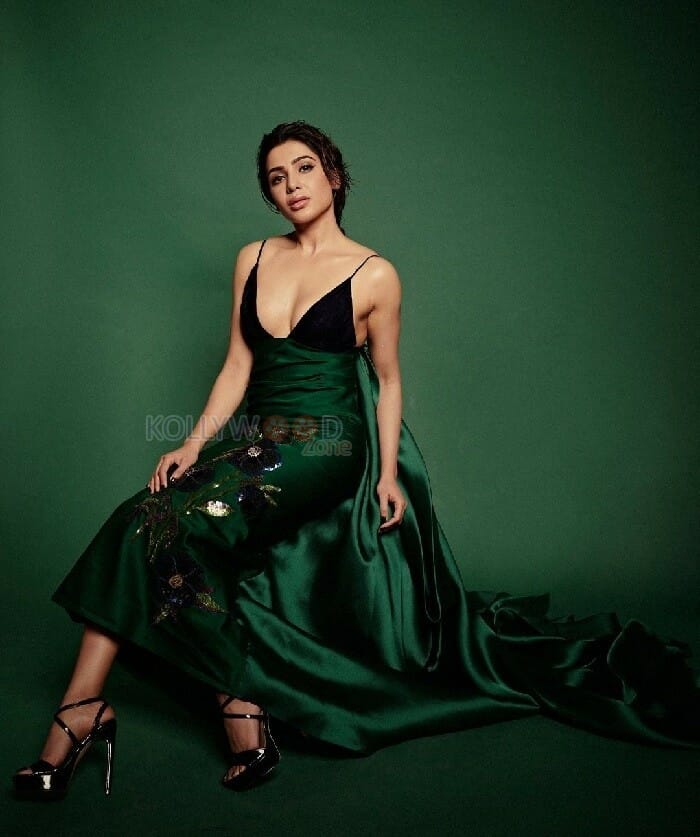 In the pictures, the actress is seen donning a deep neck dark green gown with a floral design on it. The actress looks gorgeous and bright in the pictures. She is seen sporting a variety of expressions melancholy, happy, and sensual. The lighting of the shoot has been set up in a way that lets the lens to capture the skin tone of the actress quite well. Of late, the actress has been upping her glamour game and the fans of the star seems to be impressed and are enjoying the show. The fans of the actress have jumped right in to the post and has been liking and dropping comments appreciating the beauty of the actress. As usual, there were people who trolled the actress for her attire selection and left lewd comments.

The actress also wore the same attire designed by Preetham Jukalker to the critics’ choice award function which was recently held in Mumbai. Even her red carpet appearance garnered attention of many. The paparazzi cannot seem to get enough of the actress’s beauty on their lens, and just let their shutters rolling. The pictures of actress Samantha from the event are now a trending topic on the internet.

On the work front, the actress who was last seen in the hot item number Oo solriya mama is gearing up for the release of her next Tamil flick titled Kaathu Vaakula Rendu Kaadhal which is directed by film maker Vignesh Shivan. The actress will be seen alongside actor Vijay Sethupathi and actress Nayanthara in the entertainer. Following which she will be seen in the Telugu film Shaakuntalam under the direction of Gunasekhar. She is currently busy shooting for a science fiction film titled Yashoda in Telugu which is directed by Hari Shankar and Harish Narayan. As of now the actress is yet to ink her signature for a Tamil film.