Actor Vijay Sethupathi is that kind of an actor who just loves to do experimental films irrespective of its outcome. If you take a look at his entire filmography you can realize that he is an archetype of experimentation. The actor is quite open to do roles which even many popular artists in the industry hesitate to touch. The actor is currently basking in the success of Super Deluxe which was critically acclaimed by the critics as well as audience. After Super Deluxe the actor began shooting for his film Sanga Tamizhan some time ago. 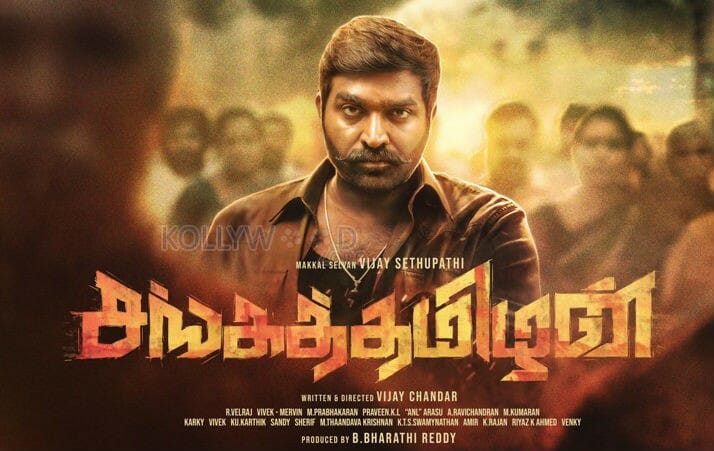 Now, the first look of the film is out on the internet in which the actor looks rugged with his menacing look. The actor himself shared the first look of the film on his twitter account. According to sources, the actor is said to be seen in a dual role for the first time in his career. The film will hit the screens under the directorial of Sketch fame director Vijay Chander. The film unit completed its first two schedules of shoot in Hyderabad city and is said to be gearing up for the second schedule shoot, which will be shot in and around Madurai. The second schedule is set to go on floors very soon.

Speaking about the project in a recent interview, the director said, “The plot of the film is set at the backdrop of North Madras. Actor Vijay Sethupathi will be seen in an intimidating role. The film has all commercial elements in it and I am sure it will be a good entertainer for all set of audience.” The film is expected to hit the screens in the month of December, probably as a Christmas release.

Other than actor Vijay Sethupathi, the film will have actresses Raashi Khanna and Nivetha Pethuraj in the female lead roles while veteran Nasser, comedian Soori, Mottai Rajendran and Sriman will be seen in various other supporting roles. The flick will be filmed by cinematographer Velraj and will be trimmed by editor N. B. Srikanth. The music for the film is composed by the recent musical sensations the Vivek and Mervin duo, who shot to fame with their single Orasaadha. The film is bankrolled by Bharathi Reddy under the banner Vijaya Productions.

On the work front, actor Vijay Sethupathi is busy with numerous films in his kitty. The actor is currently shooting for his film Laabam under the directorial of director S. P. Jananathan which will have actress Shruthi Hassan in the female lead role. The actor will be make his debut this year in Mollywood with his film Marconi Maathai in which he will be sharing the screen space with actor Jayaram. Besides these flicks, the actor has Sindhubadh, Kadaisi Vivasayi, Maamanithan and Idam Porul Eval in his hand.