G. Ravichander’s intention to make a sentimental family tale that frequented Tamil cinema in the 90’s is understandable. But the story teller has to realize that to expect the audience to enjoy that formulaic film making nearly after 2 decades is an unfair ask. If the film maker had chopped off the cliché elements and fine tuned the screenplay it might have made the flick better.

As the title and promos of the film suggested Naan Avalai Sandhitha Pothu is set in the mid 90’s. Generally, films that are inspired by real life incidents instill curiosity among audiences as people play out how the real incidents would have occurred. But despite based on real life incidents Naan Avalai Sandhitha Pothu has not capitalized on that element. Director L. G. Ravichander has managed to take us back to 90’s to an extent by dressing up his characters to the 90’s fashion as well as by making places appear old. But unfortunately the film maker has not only made the attire and locations look old but also predominant portions of his movie. 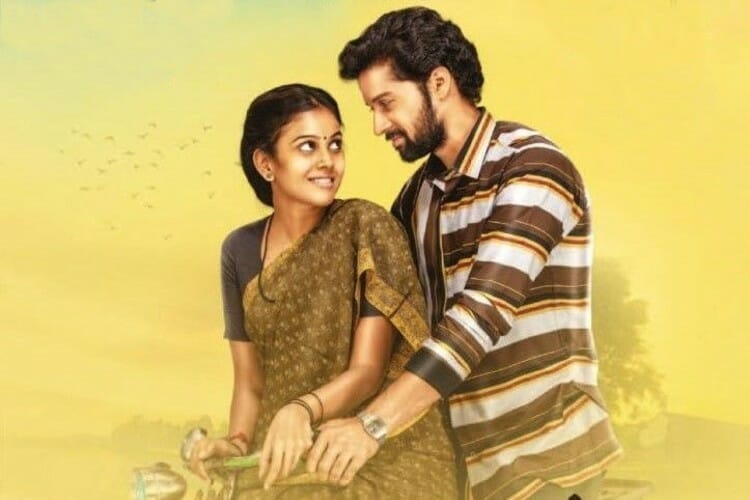 Moorthy (Santhosh Prathap) is a dynamic youngster from Coimbatore who works as an assistance director in Chennai. One day on his way home after his regular work, he comes across a woman Kumari (Chandini Tamilarasan) who is weeping. He approaches her hesitantly and learns that she eloped from her home in Mayavaram due to some family issues. And that she came to Chennai with a plan to go stay with her aunt but she has lost the address to her house. Patiently hearing out Kumari, Moorthy counsels her and suggests her to go back to her parents. Kumari, being scared of travelling alone in a new city requests Moorthy to take her to the bus stop. Reluctant to leave her alone, Moorthy obliges to take her to bus stop.

When they reach the bus stop Moorthy is put in a situation to accompany Kumari to her village. They arrive at Mayavaram, just when he leaves Kumari and gets ready to depart back to Chennai he witnesses Kumari being harassed by few drunkards. And you know what a hero does when he sees injustice. We get the cliché action block and he rescues her from them. This incident propels him to decide to take her to her village safely. In bizarre turn of events, the villagers presumes him as her lover and without giving any room to Moorthy to explain himself, they get him married to Kumari. Worried about how he is going to convince his family members who are already in the hunt to find a suitable bride for him, he hatches a plan to elope from the village by night. Even after making up his mind to elope he gets intimate with Kumari before fleeing from the village.

Back in Chennai he finds it hard to get a break as a film maker and struggles to make ends meet. In the meantime, he learns that Kumari is pregnant with his child. Despite his mother’s bride hunt he makes up his mind to bring Kumari to Chennai and live with. How will he convince his parents and did he make it big in the cinema industry, is what makes the rest of the movie.

Director L. G. Ravichander’s efforts to take us back to the 90’s are evident throughout the flick. From costumes to even things in the background he has taken due care to ensure that they belonged to the 90’s. But unfortunately that is not enough to make the audience fasten to their seat for a span of two plus hours. Predominant portions of the flick are filled with cliché scenes from 90’s which naturally give us the feel of watching a 90’s film in the theater when it could be watched on television almost every day. Perhaps, the film maker took the 90’s element too much in his head that it had also reflected in the plot of the flick. Being a 90’s film does not necessarily have to be in the 90’s template. Last year we had Saravana Rajendran’s Mehandi Circus which was set at the 80’s but yet the film maker managed to tell us a poignant love tale.

Actor Santhosh Prathap after his gripping performance in Podhu Nalan Karudhi has delivered a neat performance. Particularly, the actor stands out with his craft in emotional scenes. Actress Chandini Tamilarasan, who has been laying low for some time has utilized the opportunity rightly and has put on a show. She is apt in the role of an innocent meek village girl. The rest of the cast has delivered what is required for the flick.

On the technical end, cinematographer Selva has complemented the efforts of his director by capturing the film in the 90’s tone well. Despite his inconsistency musician Jithesh Murugavel has added strength to the movie.

Film maker L. G. Ravichander’s intention to make a sentimental family tale that frequented Tamil cinema in the 90’s is understandable. But the story teller has to realize that to expect the audience to enjoy that formulaic film making nearly after 2 decades is an unfair ask. If the film maker had chopped off the cliché elements and fine tuned the screenplay it might have made the flick better.

On the whole, despite good performances from its lead cast too much of archaic tone has weigh down Naan Avalai Sandhitha Pothu.