Raai Laxmi, the actress who set foot in Kollywood in the year 2005 with her film Karka Kasadara starring Parthiban has managed to cross the 50 film-mark in her, a decade long career. The actress who began her acting career in Tamil went on to act in other South Indian languages like Telugu, Malayalam, and Kannada. The actress has also made her debut in Hindi with an extended cameo role in the controversial film maker A. R. Murugadoss’s film Akira but later on she did make her debut as a female lead through the film Julie 2. 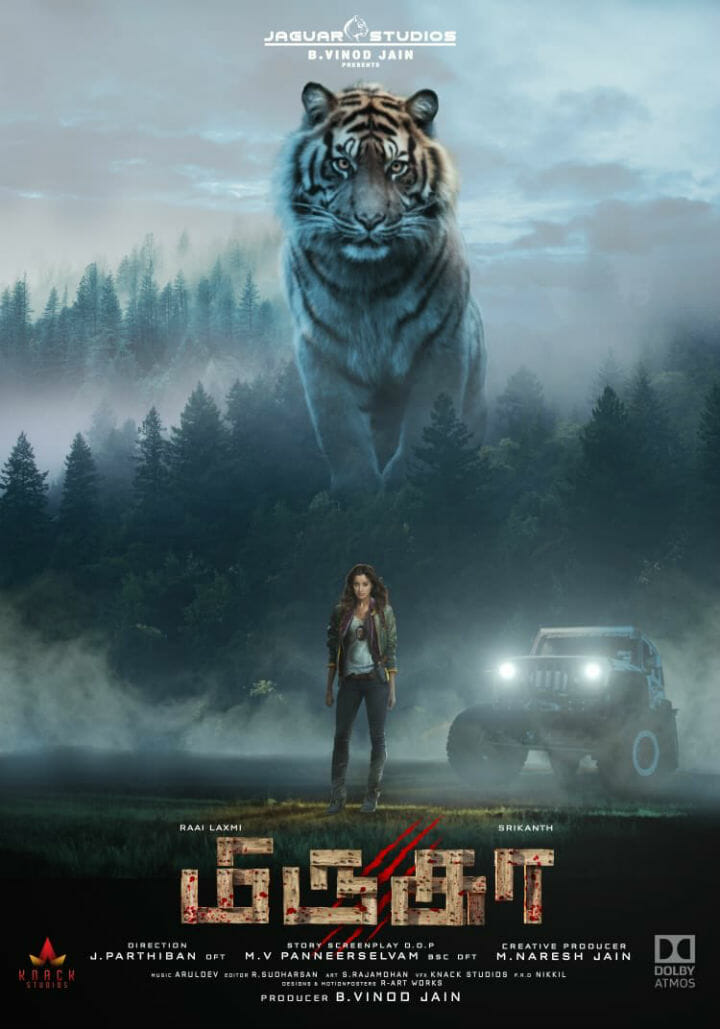 The actress is currently gearing up for the release of her multi starrer film Neeya 2 starring Jai in the lead role with Catherine Tresa and Varalaxmi Sarathkumar in pivotal roles. The flick is the sequel of the film Neeya which hit the screens in the year 1979 with veteran actors Kamal Hassan and Sri Priya in the lead roles. Now, the actress who is busy shooting for her Telugu film Where is the Venkatalakshmi has launched the first look of her film Mirugaa in which the actress will be sharing the screen space with actor Srikanth again after Sowkarpettai.

The actress took to her twitter account and shared the first look of the film stating, ‘wohoo . . . this month has been exciting here’s the first launch of my next.’ In the first look poster of the film, the actress is seen in front of a dense forest with a jeep behind her with flashing head lights creating a misty lighting appearance and at the background we get to witness a huge tiger with fierce look. The script which is penned by cinematographer M. V. Panneerselvam is directed by debutant director J Parthiban, former associate of critically acclaimed director Bala. The film is set to hit the screens as a bilingual project in Tamil as well as in Telugu.

Speaking about the project, the director said, “Mirugaa is a psycho thriller film which will have actor Srikanth in a never seen before role. The actor will be seen in gray shades. The actor portrays a role of a sadist who takes pleasure by harassing and killing people. Raai Laxmi plays a role of a rich widow who resides with her sister and her daughter in a tea estate. Srikanth gets to meet Rai Laxmi through an advertisement posted on a matrimonial site by Rai Laxmi’s sister. We have shot the film in picturesque locations in and around Masinagudi, Ooty, and Goa,” concluded the director.

The film is bankrolled by B. Vinod Jain under the banner Jaguar Studios. Along with story and screenplay M. V. Panneerselvam takes care of the cinematography, while the editing department is handed over to R. Sudharsan. The music for the film is composed by Arul Dev.

On the work front, the actress is busy shooting for her Telugu film Where is the Venkatalakshmi after which she will be joining the sets of Mirugaa. Apart from this film the actress has Cinderella in her kitty.